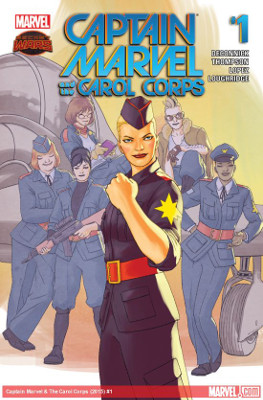 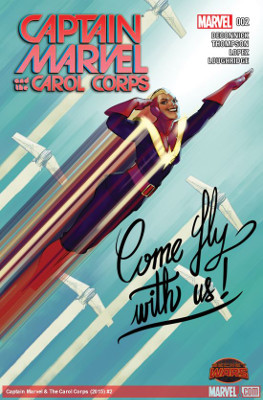 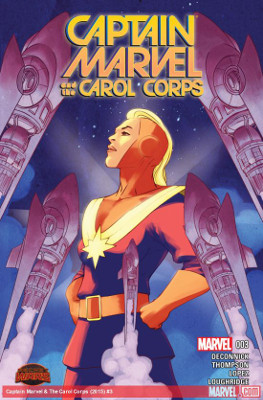 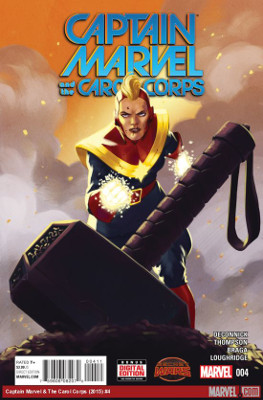 Not a huge fan of these stories and this crossover event, however, in this case, it does give us a moment to tell an interesting story: To bring those women from DeConnick’s first run of Captain Marvel back and give more to their stories.

I also feel like I want to be more excited about this book than I actually am.

Oh, Kit, she finally got her wish to be a superhero. Or in this case, a super-enforcer for a super villain. I have a feeling that she might come around in future issues to the Carol Corps’ side.

It was clever to see both Carol and the rest of the Corps discover that something suspicious was going on separately, but instinctively trust each other with the information. They do make a great team.

This mousey version of Helen Cobb is interesting, as is Tracy as their commander. The latter will definitely not be onboard with the Carol Corps striking out on their own against Dr. Doom.

This book continues to be a drier tale. I love having the original Carol Corps back together and bringing Helena and Tracy in. However, I’m not intrigued, perhaps because the main mystery of what’s in the sky just isn’t that interesting. (Also, I’m completely calling Tracy as a Doombot right now.)

Sounds like Rhodey’s world is one of the worst. And his whole “I remember being from another place” vagueness is just that: vague.

I do love that Helena’s going to get them in trouble. After they all spend that time of having Rhodey’s cared for in secret and modifying their ships to become rocketships, not just jets. Her blast off into space isn’t going to fool Tracy anymore. I imagine they are beyond the regulation modifications allowed by Doom.

I continue to have a hard time connecting with this book. Part of me wants to know what the stakes are here. All these little universes feel like throwaways ‘verses so it’s hard to build attachment.

Additionally, the Banshees’ early arc wasn’t my favorite. And I found it hard to get to know each character and care about them. With that and this, I’m still not connecting to these characters or getting to know what makes each of them unique. That’s hard to do, and it’s rather impossible in such a short sprint. This isn’t like how we got to know the other characters in Captain Marvel like Kit or Wendy. I want to care about them.

I liked how the other women didn’t want to kill Carol or the Banshees and vice versa. It was great to see them take out the other women without killing them, especially given the ideals of Doom.

The go-pack with Rhody was pretty funny. Especially since we know in the regular universe Carol and him are dating.

However, I don’t really think anyone except Carol has much of a chance against the Thors. Whom I assume can travel between the universes already.

Loved to see the coordination between the Banshees, Carol, and Rhodey. They show that teamwork pays off, especially since the Thors, who want all the glory on their own, but are supposed to work together. Of course, when you have a ton of power — enough power to be a god — you can be overconfident. Just don’t go against the Banshees.

Surprised that Lopez didn’t finish this book out. I guess he was needed on other books for the big Marvel relaunch. However, Braga and Pantalena did a great job at filling in.

Loved seeing the Banshees taking out all the other Thors. This means that Kit and Carol go toe-to-toe. When it looks like Kit’s decided to go with the power of being a Thor, she just can’t see her childhood hero be taken down by the other Thors.

The ending was great. But it wasn’t as powerful as the ending of Captain Marvel. And DeConnick’s letter also overshined Thompson’s work on the book.