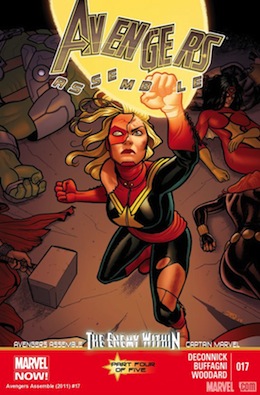 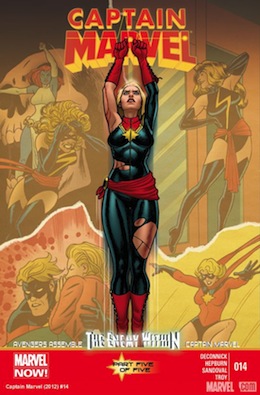 This seemed like a quick issue. One waiting for the next one. There wasn’t much too it. Except that they found Yon-Rogg.

Interesting that Yon-Rogg is somehow in Carol’s head. Does this mean that he’s trying to repopulate himself there? That Carol is Yon-Rogg? I mean, we haven’t seen him interact with anything or anyone? But you’d think that Carol’s people would know if she’d been acting weird or missing.

I guess mostly, I’m interested to read the next issue.

While I appreciate that Carol took down Yon-Rogg herself in the end — I wouldn’t expect anything else from DeConnick — I found the arc slightly tiring. I found myself really wanting everything to wrap up pretty soon and get onto where Carol’s going. Or new adventures with her friends.

I’m a big fan of her crew, and I hope they don’t go away. Since obviously, even though she’s dead now, Carol will be coming back. This wouldn’t be the first time she’s gone into the cosmos and come back a new woman. Hopefully, her experience will be less rapey. (Actually, my expectations are much higher than that for DeConnick’s pen. That would be the low-bar talking.)

I don’t think Carol will be getting kicked out of her building like she feared after saving all of New York City. Of course, I suppose you could blame her for the troubles to start with. Or some of them.

I’m not sure Sandoval’s art blended all that well with Hepburn’s. They have pretty unique styles.

I’m glad to see editorial making mention that yes, Carol’s coming back and that there will still be a Captain Marvel title. Even if that breaks some of the feels about Carol dying.

Dive into Carol’s continuing story, buy Avengers: The Enemy Within