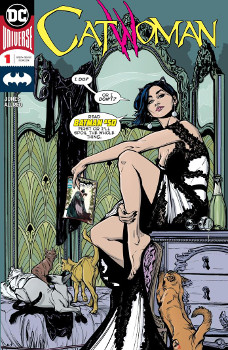 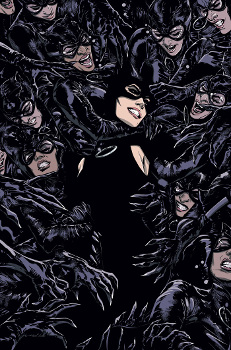 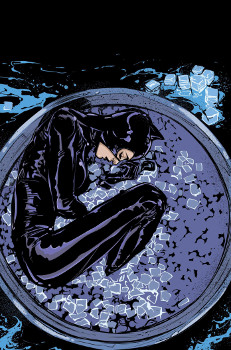 Like the naughty cat I am, I did not read Batman #50 before I started this title. Sorry, DC, but just couldn’t do it. So I’m a little behind and playing catchup with this story, which I’m entirely okay with.

Selina is on the run. She’s being blamed for two murders, which a copycat did. And then she discovers there’s more than a few copycats in town.

I’m sure how I feel about our baddie. Batman always plays with the grotesque and body horror. I just don’t know how that compares and contrasts with how Selina is always a beautiful woman. I don’t think she’s ever had to deal with feeling ugly due to society. Except in the ways media and society tell every woman she is not beautiful enough.

My favorite part is predictably how well Jones can draw a cat. She understands how cats hold themselves, and how each cat is unique. Now I kind of want to commission her to draw portraits of my kitties.

I was a little disappointed that Jones didn’t do a revamp of Catwoman’s costume. It’s been something like 15 years since Catwoman had a new outfit. Maybe she will update her wardrobe in light of all the copycats.

I’m super curious about the open armpits in Catwoman’s uniform. I mean, on one hand, you can sweat your opponent to death, signal to them that you’re gay with your armpit hair, or it cools you down. I’d love to hear Jones talk about this specific aspect of the costume.

Seems like having a lot of ladies dressed as Catwoman leaves a lot of liability. We see how easy they were to beat, and how scared they actually were of Selina.

I do like Carlos and his relationship with Selina. They have a nice sarcastic respect of each other. The tools in the rectum plug was pretty hilarious. Especially her reaction to it. It doesn’t seem like it would be very useful though considering you’d have to undress from your catsuit in order to grab it.

Still not sure of this villain. Or exactly what’s happen in her husband’s retirement scene. Though I do enjoy Raymond Creel and how suave he is. Clearly, he’s supposed to be a little Bruce Wayne, and can turn on the charm when he needs to. It’s interesting to see how Jones draws him in the scenes with his mom and then with Selina.

I hope that we’re only having Blanco on art for the flashback scenes. I love Jones’ art, and that’s a big reason I’m picking up this book. But DC too often pushes their creators too hard to get the books in deadlines and one of their “hurry up and publish this” features is multiple artists on the issue.

I’m not sure what we were supposed to get out of this flashback and yet another husband murder from Raina. I’d much rather know why she and Selina have a beef with each other. The blocking in her murder scenes with the first husband and his family was odd, and visually, it didn’t flow well.

I do like the acknowledgements that Selina isn’t bruise or cut proof. She may look great in that dress, but the work of Catwoman is hard on her body. Though I kind of wish we’d also see scenes like this with Batman.

The drugs for older people getting super powers were only marginally interesting. But I wanted to know more about Raymond and more banter between him and Selina. Again, a bit more interesting than the fight scenes.

Oh, Carlos, he’s a bit into Selina. Not sure if it’s love, or if it’s intense admiration and interest in her and what she does. I will be interested to see how their relationship develops.