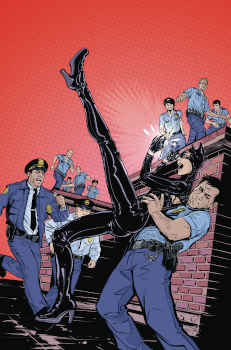 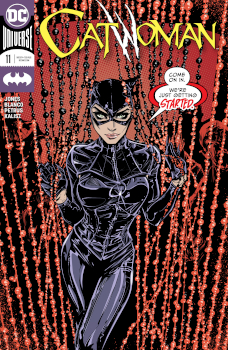 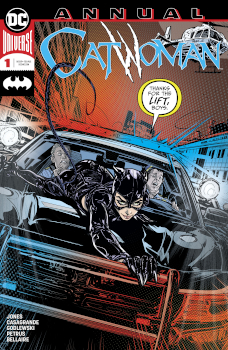 I have to say: it’s ballsy to open your book with a character narrating about how this must be confusing. Yes, it was confusing because issue #8 ended on a cliffhanger, and issue #9 was a complete non sequitur of another Catwoman story.

Besides this story continuing the ongoing plotline, I liked Jones using Carlos more than she has previously. It was kind of like the other author reminded her he existed.

And Blanco draws my favorite Selina hair. The whole time, I was thinking about how I’d love to have the same hairstyle as her, and trying to figure out if the comic book hair would translate to my hair type. It’s so lovely when comics care about modern fashion.

Adam is freaking creepy. I don’t blame Raymond for running away from that whole mess. Somehow I don’t think he’d win reelection if his reanimated little brother showed up. Though I am confused about the art proportions because, in the limo scene, it appeared as if Adam had grown since he died.

Maybe the rest of the artifact is a true Lazarus pool. Does Selina want to use it on Mags?

I have to say I was far more into Selina and James flirting. From the art in James’ loft, I’m going to say that he’s a forger, which would make more sense with how Selina immediately trusts him to run crime with her. Though they really should be more quiet about it while at the auction.

Carols’ escape, while dramatic, was pretty boring. Like sure, Catwoman crashes some movie premiere. There’s plenty of people and distraction — but there’s also some overwhelming camera presence — for them to make their escape through.

I hated how Catwoman has heels. She’s bouncing around everywhere like a gymnast, and her heels would 100% break her ankles. Stop putting superhero women in fashion heels; thank you.

I don’t have much of anything more to say about this issue, beyond that Raymond wants to split with his mother. I’m not sure what Yilmaz wants from the pawnshop, but it’s probably blackmailing.

I’m confused here. Was I supposed to read #12 to finish up that story before I read the annual? The cover seemed to suggest it would take place right after #11. Was this supposed to be a very old flashback to Ed Brubaker’s Catwoman? But it doesn’t seem like she’s in Gotham, which is where that book was set.

Jones’ justification for Selena’s attraction to crime — specifically her stealing — was weak. It didn’t tell me much about how she sees this character. I already thought Mags, Carlos, and the other lady kind of showed how Selena gathers people around her. She’s not a lone cat.

Bellaire’s colors brought this issue together. I noticed some different artist’s styles based on layouts more than anything else. Plus, you know, Bellaire’s one of the best in the business.

I don’t know anything about the Immortal Man. He does seem like a character that Brian Michael Bendis would bring up, and maybe this is more of a tie-in to the current Superman run. Of course, his immortality ends when Catwoman spears him and then breaks it. (Does it mean Vandal Savage is also now mortal? How does this work?)

Catwoman/Selena’s balance with the police is still confusing.

There’s a lot of layers here that require DC back knowledge. This story doesn’t stand on its own. Even if we all knew Selena would track down Amanda at the end.