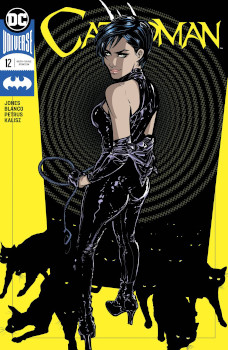 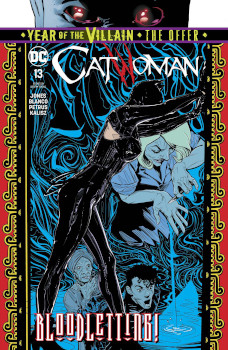 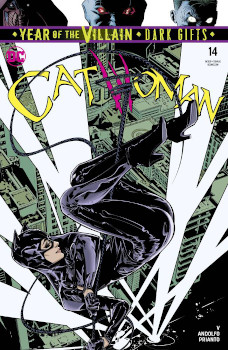 Finally, we get to end the car chase. This car chase has been going on since — check notes — issue #8. The pacing is so bad in this story, not to mention the weird side stories and out-of-timeline issues by other writers.

Carlos’ hair, however, remains on point. Though I am surprised he didn’t think James and Selina would connect with each other. James seems like man-made for her. I appreciate their flirting. Plus, I like Selina getting a love interest that isn’t Bruce, since that rarely happens.

Linda gets kidnapped by Raina. At least at this point, there’s a reason for Raina to be tracking down Selina and pissed at her. I’ve never really gotten her motivation — and the drug that made old people strong seems to have just been forgotten as a plot point. Adam gets more creepy.

Mags is going to get a revival next issue.

What a convoluted issue. The switching between the three artists didn’t help. Blanco’s action layouts don’t flow in the way fights should, and instead, they become too much information input. Jones’ style is definitely the winner here; I wish she was always the main artist on the book, but DC wouldn’t be able to churn out books as quickly as they’d like if she was on permanent full creator duty.

Mags seems to have disappeared completely from anyone’s art. She was the nearest one to the artifact in the last issue, but poof here.

I’m not sure what the point of Selina telling James they cannot be together was. Her lecture is off because both Carlos and Linda are already involved in her business and their lives are in real danger this entire arc. I get that maybe Jones doesn’t want to tell a romance story, or perhaps she wants to give Selina time to heal over her called off wedding/engagement whatever with Bruce.

Raina has gone from having a plan to just batshit crazy. It makes no sense why she would kill Raymond for the lazarus pit map. She at least seems to love her sons, even if Raymond told her he wanted nothing to do with her after she brought back Adam from the dead. I’ve never truly understood Raina’s reasons for going after Selina, but now she just seems “crazy,” which far too often happens in Gotham-related stories as the villain’s modus operandi.

It’s another slightly out-of-continuity story from a not Jones writer. I honestly do not understand DC editorial decisions here, beyond an insistence on getting a book shipped every single month. This is so incredibly jarring.

We start with Catwoman lamenting all about Batman. This is the first time since the start of this series — which kicked off with Catwoman leaving Gotham City after almost marrying Batman — that we’ve seen Selina mopping around about Batman. Of course, a man is writing this. The whole inner monologue around how Selina feels about Bruce was classic a man writing a woman.

It infuriated me. Especially since over a year into these books is not the time to finally have a lamenting over a boy scene.

Next up, we have some incoherent criminal ring that reads like the writer randomly putting in a character with aphasia. I do not claim in any way to be an expert of aphasia or this type of disability. However, it’s rather odd that the words this villain loses were always at the end of his sentences. It read in a pattern.

Andolfo should not be allowed to draw cat butts. I am an expert on those.