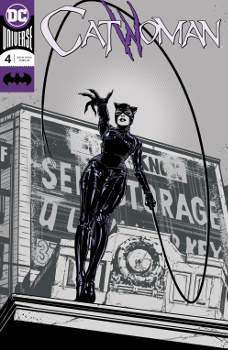 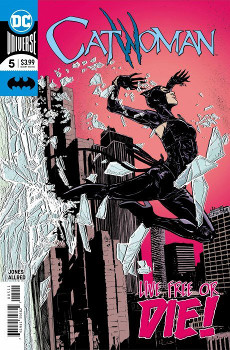 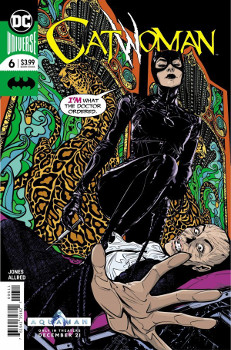 This book is confusing. I honestly have no idea what’s happening in it, and my prolonged reading pause between each issue isn’t helping with this. Jones writes the story in a way that feels like we’re supposed to know about Mags and we’re supposed to know Raina. But sometimes these things are hard to tell in comic books.

I didn’t buy the emotions in the current timeline. They didn’t ring true, only as more trauma for Selina. Just more justification for her being Catwoman.

What I did buy was the flashbacks to Halloween. About the girl who stole a cat costume and one of an angel for Mags. (Though far too on the nose with that costume choice.) You can see the two girls getting bullied, and how far it’s going to go. Selina knows they won’t stop, so she’s going to stop it herself.

These plots need to start tying together for me.

Drugs are bad, elders. I’m trying to think of a metaphor here beyond FOX News.

My friend Max described Raina as Lucille Bluth, and now I want Jones to draw Raina as Jessica Walter. Of course, it seems like perhaps Raina likes to pretend to be a little younger though she’s just as controlling of her sons.

I’m pretty much Catwoman here in that I too want to know why Raina is continuing to go after Catwoman. Like why?

Raymond is less intriguing than I previously thought he was. It will be interesting to see more of his dynamic with Raina now that his father is dead. Also, will this be a situation where the wife gets to take over the husband’s political seat? This used to happen all the time in US politics — and I think it still does a little bit — but originally, this was one of the only ways women could become politicians of any prominent office. Which is now hard for the country to remember, and one of the ways that Hilary Clinton was a very typical politician, and of course, the first woman to have a serious chance at POTUS would be someone who was FLOTUS before she was a senator and secretary of state.

Somehow Mags woke up. Maybe she wasn’t really out of it?

That last scene with Selina in her Catwoman costume and the rope over Raymond’s neck is basically my sexuality. (Thanks, Michelle Pfeiffer.)

I phoned a friend to get some clarity on this book. Mostly in that, it is supposed to be a standalone book. Which means none of it, except perhaps Catwoman’s emotions, are from the Tom King Batman aftermath.

I rather adored Jones’ depictions of the action and Catwoman’s acrobatics. The movements were so smooth across the panels and worked seamlessly. This is top-notch art, and great art is a significant reason why I’m picking up this book. (Jones does move to just writing Catwoman soon, so it will be interesting to see if her writing for another artist will translate the same way.)

What Selena says to Detective Yilmaz is perfection. Like Batman Returns Selena perfection. This is all I want from my Catwoman comic books. I don’t care about the old people and the drugs, or even Raina and her power-hungry self, just Catwoman saying sexy stuff and doing gymnastics with her whip.

No one is surprised when Adam gets shot. No, the kid will take a bullet for his brother, for his mother, for a plot to put Selena further on the run. Though I’m wondering just how she’ll be able to keep Mags out of all of this.