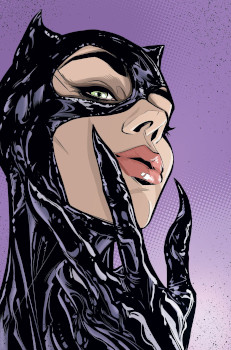 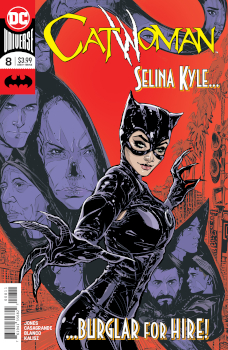 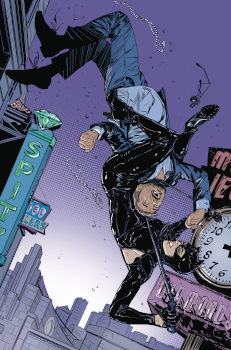 I suppose we couldn’t have Jones on the art forever. That wasn’t going to be sustainable for the long-term.

I’m kind of unsure how Selina can walk around in this town since Raina is after her and knows who she is. I mean, she couldn’t have gone after Mags if she didn’t know Catwoman’s secret identity. Though since this revenge is personal, perhaps she didn’t share that with the police.

The scene with the earrings was over-the-top and on-the-nose. But of course, old men gatekeepers would act like that. Women should reward themselves for a life well-done. Or stealing well-done.

Penguin is such an odd choice. Like I want to know if they have more of a connection than the movie. Also, like why weren’t there more police, firefighters, and news helicopters circling the place. That’s some major property destruction without anyone responding but Catwoman. That’s some true bullshit and comic handwaving.

Also, I feel bad for those fish and other sea creatures who are going to slowly die as the water seeps from those cracks. I suppose we’ll get more of Penguin and Danny DiVito-style fish slurping.

This statue appears to be some kind of Lazarus device; only instead of a giant pit, you just have to drink a little of it. Of course, we’ll see what happens to Adam when he lives again. He may not come back as wholly human. (Though it is kind of surprising that Raina doesn’t try to buy two doses to see if it will heal whatever happened to her.)

The high heels and costuming in this book kill me. No, they make me feel very old. The device protector’s top barely covers her boobs, and in some of the scenes, you get a complete view of her underboob. Everything is worn to be sexy, instead of practical. Even Catwoman isn’t in her best and most useful costume, instead it’s the most bondage one.

This styling also makes the book feel out of time. One way to ground everything is to make the fashion contemporary and have fashion actually matter. But instead, we get these sexy costumes or “politician wear,” which I don’t think has changed much in the United States since the 1950s.

I don’t understand why Raina calls Yilmaz to witness Adam’s resurrection or lets him see her without her face fully together. And what she says to Raymond is cruel, even for her. Though I guess Raina technical hasn’t broken any laws in buying a magic potion and giving it to Adam, except in that if she dug up Adam’s body that might be against the law, but she is his next-of-kin.

In combination with her outfit, the protector’s warnings to Selina about the price of the device were yawn-worthy. Considering how white this book is, this is another use of a person of color poorly and stereotypically from Jones.

Why is Catwoman so shocked that the Penguin set up a trap to get the device all to himself?

Did I open the wrong comic book? That was my first question. Though Joëlle Jones and Laura Allred definitely did the cover, and that’s how I knew I had to have the right series.

The last issue ended with a cliffhanger. Catwoman was escaping the building of her latest job to steal a Lazarus artifact for the Penguin, only to be double-crossed by the Penguin and his gang, not ready to pay up for Catwoman’s work.

Instead, we get a random story about Selina taking down Xin Liu, aka “The Broker,” who’s a mobster and whose team is also doing burglaries across the city.

Carlos, who returns here, has been one of his victims. The Broker’s team stole a bracelet Carlos planned to give to Amar, the guy he’s into. I guess this clears up if Carlos has a romantic interest in Selina or just a fascination with her. (Though he still could be bisexual!)

Selina gives Carlos a hard time for using the old fashioned phrase “going steady” to describe serious dating, but then when she calls in for information about Detective Dean Hadley, she calls him a “Barney.” Which is a very old fashioned reference, and one I looked up — because even though I went “of course” at the search result, it’s not tip-of-the-tongue.

Does everyone know Selina is Catwoman? Like even here, if he wanted to, Handley could’ve arrested Selina for many things. She’s not absolved of all those breaking and entering crimes, even if they cannot prove she stole anything.

Carlos was right to go to Selina if he ever wanted to see that bracelet again. The police never recover stolen property that isn’t a large ticket item like a car, but even then, it’s rare. A friend of mine had his car stolen, and when the police did recover it (randomly), it was full of stolen phones and random other things like paperwork and purses. The only thing the police were interested in returning was the car itself, and they took into custody any drugs, cash, or guns. But even then, the cops didn’t do a deep search, as my friend was instructed to “be careful” as he looked through his car and to turn in any drugs or guns he found. He ended up asking the officer to come out to his car, which was a good thing since one of the first things he found was a gun.

Anyway, long story short, DC editorial and directors, you don’t have to print an issue every month.