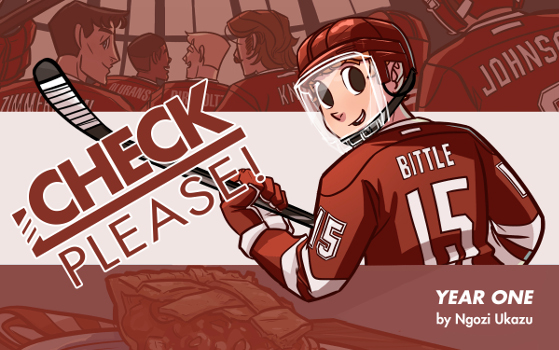 Sweet Eric Bittle, or Bitty, heads to college to play hockey in the delightful Check Please! What I love about this book is that you can tell Bitty is a character who lives a lot in Ukazu’s head, and we get the privilege to see him grow. Ukazu writes about she never really intended to make this into a web comic, or a series. But Bitty resonates.

While yes, this is one of those college stories where they never seem to actually go to class, what matters in Bitty’s world is his vlog, hockey playing, hockey team, and baking. Bitty stress bakes. Bitty bakes to get people to like him. Bitty bakes because there’s a kitchen — even if its a gross kitchen he has to clean first in the hockey team house.

The smallness of Bitty’s world feels so right. I went to a small liberal arts college, and there is a familiarness with the people you go to school with — even if you don’t really know them — that feels captured in Check Please!

Ukazu does wonderful work showing how Bitty becomes part of the team. He wins over Shitty and Lardo, and eventually, Jack, the star player who’s supposed to be just like his dad, a former famous NHL player. We see Jack’s anxiety because Bitty cares about him.

Jack and Bitty’s tenuous relationship is at the heart of this. It’s clear that Bitty — whether he realizes it or not — has a crush on Jack, and as far as we know, Jack is straight. (Check Please! is from Bitty’s point-of-view after all.) I love the moment when Jack realizes he’s a better player, team captain, and friend with Bitty on his team, and he even helps Bitty conquer his fear of being checked on the ice.

I’m looking forward to reading the next couple volumes of Check Please!