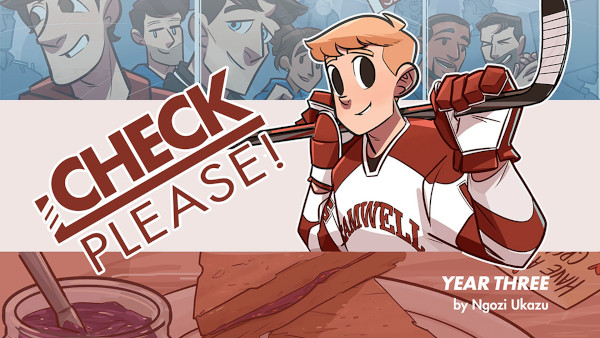 This volume was the best yet, and I gave it five stars because, finally, all the feelings happened on-page. As much as I love Check Please!, too much of the story’s emotions in previous volumes took place off-page. With Jack and Bitty now officially dating and in a long-distance relationship, their feelings are upped by a lot.

Much of queer life is defining your own story. For Jack and Bitty, they are establishing their relationship for themselves and how to navigate the world with their families and teams and with Jack being an NHL rookie. Yes, there’s a lot of coming out, but how the story’s framed, this isn’t a coming out volume, but mired in the reality that as a queer person, you are always coming out.

I have to say I was surprised Bitty’s family didn’t know he’s gay. Parents can have some deep denial.

On the same end, I was surprised Jack’s parents were so welcoming to Bitty. We don’t see them — which was probably the biggest off-screen miss for me on the story’s beats — but they’re excited for Jack and Bitty. It was a subtle subversion of Jack and his father’s relationship to have him supportive of Jack being gay.

I’m not sure what to think of the tadpoles. Except for Foxtrot, who I love a bunch and has an adorable design. (Even if I still don’t see a university letting one woman live with a bunch of men as usually these houses are segregated along binary gender.) The tadpoles haven’t fully formed the way Shitty and Lardo have. I did, however, expect their social media use to accidentally capture and out Jack and Bitty. There were many times those two weren’t very discreet around others. (Which is why when Jack and Bitty had brunch with the entire college team and officially told them, most of them had already figured it out.)

Kent’s very jealous. Both of Bitty dating Jack and of him being out and supported by his team. I don’t think this is the last we’ll see of Kent.

Bitty becoming the team captain was incredibly sweet. There wasn’t much time for him on the ice in this book — we see a lot of Jack’s rookie struggles, usually related to what he can and can’t share with Bitty — but the scenes we get are wonderful and show how much Bitty’s changed.

There was a lot of Bitty and Jack cuteness, which is all I wanted and more. They are incredibly sweet and love each other. I cannot wait for the next volume.