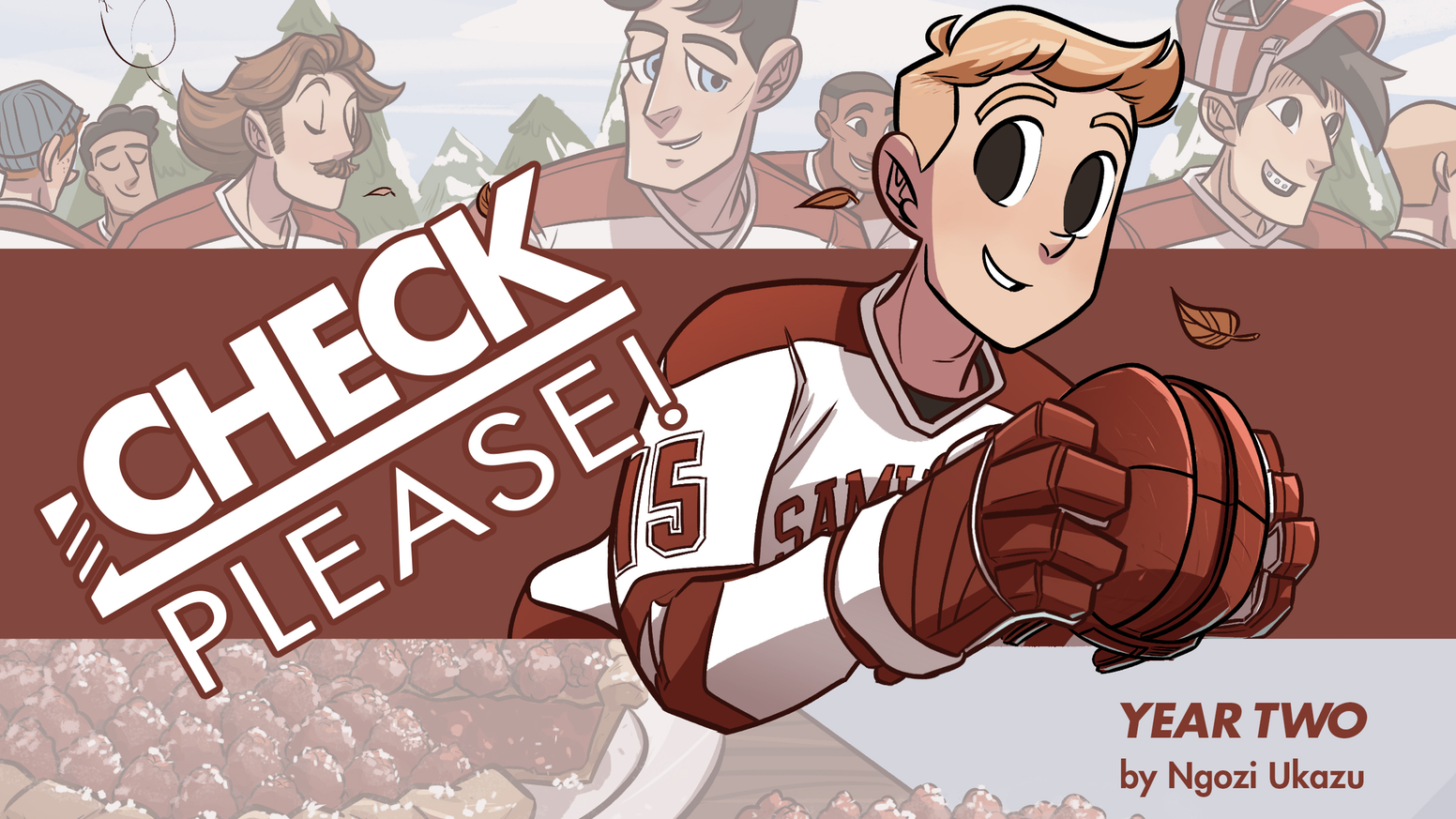 What? That ending just made me want to know more, or have more. I kind of wished that Ukazu would’ve included a true “photo” gallery of the images she put up on Bitty’s Twitter account.

Check Please! remains super charming. Bitty is always extremely likable, even if perhaps he spends a little too much time on the phone and social media-ing. (Though like all my life advice, I say this to myself.) I also put this down wanting the next volume now.

What kept me, however, with a four rating were some plot inconsistencies, and some scenes I think we should’ve seen, instead of heard about. For instance, when the oven breaks and the team gets a new one for the haus — but mostly for Bitty — it would’ve been sweet to see that scene. Especially since it was Jack who started initiated the decision to surprise Bitty with a new one.

The season starts off with Bitty even more terrified of checking due to the concussion he got last year. He becomes frozen when he’s slightly bumped on the ice. This puts Bitty’s entire college hockey career into jeopardy — and one talking to by the coaches makes everything clear up?

There are no scenes of how Bitty and Jack work together on the ice like in the last book. Or, they play on a frozen college pond mid-winter and Bitty shows off his ice skating moves. They make mention that he should use some of the fancy footwork in the hockey games (maybe not those lutzs) and then it’s kind of left there.

Perhaps my biggest gripe with the plot is the introduction of Kent Parsons. Kent graduated the year before Bitty started at Samwell University, and he went on to play professional hockey. While at Samwell, he and Jack were a pair on and off the ice. I don’t know if Ukazu always intended to eventually hook up Bitty and Jack and make Jack bisexual — but Kent seemed to come out of left field. The team seems obsessed with their own history, including that of all their players. If Kent was so good, he graduated to the NHL, they’d talk about him. Someone definitely would’ve mentioned his and Jack’s relationship — or rumored relationship — or something!

I also felt that when last year Bitty came out and Jack and Bitty got closer that Jack would’ve also come out to Bitty. Instead Bitty is so convinced Jack is straight that when he finally realizes he’s in love with Jack he literally says, “Something I should’ve learned long ago, never fall for a straight boy.” (True relatable life lesson for all queer people.) Of course, right after that Bitty eavesdrops on Kent and Jack arguing and making out. But they never discuss it further.

I guess if Bitty and Jack were going to kiss, I didn’t think Ukazu would wait until after the graduation ceremony, but instead perhaps they would’ve comforted each other more after they lost the championship game.

Things I did really enjoy about this volume — we got to know the other characters better including Shitty (who’s going to law school!), Lardo, and the three frogs, Nursey, Dex, and Chowder. There are also discussions about class and race, and while they are on the fringes, add more texture to this world. Hockey can be so very white, male, and middle class (or who can afford equipment and has the time to take kids to games).

I am looking forward to more of this universe. I hope we’ll get to see Jack and Bitty discussing how their relationship will work, especially since Jack will be in another town, have a grueling schedule, do lots of traveling, and generally be out of the Samwell Universe. I also wonder if Ukazu will explore being gay in professional hockey and how Jack will have to make choices around being out — or if this will be a kind of magical universe where we don’t have to worry about that.