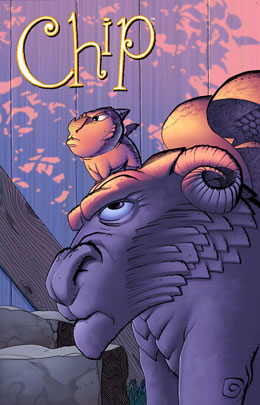 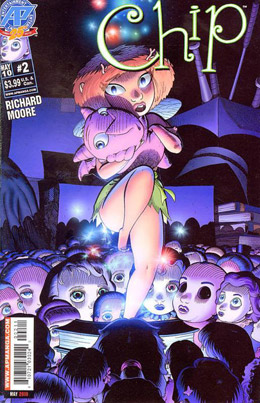 After reading Moore’s Boneyard, I really wanted more of his wacky horror-humor mix. Even though he writes about vampires, ghosts, gargoyles, etc., they’re never scary. And that’s the basis of Chip. Chip’s a 4 1/2 inch gargoyle who isn’t scary. But he really wants to be. He lives on a farm in upstate New York where chipped gargoyles are put out to pasture. But Chip’s not chipped, he’s just not scary.

His best friend Ash is a pixie, and there’s a cat Burble, who’s in love with him and always rubs against Chip. Interestingly enough, Burble cannot speak and is just a cat.

After all the other chipped gargoyles make fun of him and give him a demonstration of their scaring power, Chip sulks away. He finds Ash and starts hatching a plan to learn how to be scary. Chip decides they must go to the haunted farm house to find ghosts, which can then teach him.

Of course, Chip himself is scared of about everything in the house and the wild. This book is really cute and well worth the read.

Chip continues to be a freaking adorable tale. Continuing Chip and Ash’s exploration of the haunted house for ghosts, they run the heck away from those creepy dolls in the attic. Moore had me going enough that I was expecting the dolls to start talking. But no, they’re just creepy dolls. Moore does a great job here with the art to make the dolls creepy.

Of course, Chip decides they need to venture into the basement. The basement being the last official “scary” place of any house to look for ghosts. Ash tries to help Chip down the stairs; but the little gargoyle is too big for her to carry. He slides down the banister, right into the wall with all his momentum. I totally remember being a kid and sliding down the banister when my mom wasn’t looking until we moved into a house where that was impossible.

Here Chip gets brave when he’s a ghost. He bashes the ghost on the head, which says Chip has more gumption than others give him. Of course, he’s stopped by Ash, who’s noticed that the “ghost” is not a ghost, but Burble under a sheet. Chip then tries to play off his actions as heroic. He was just like a ninja.

Chip then decides to make a oujia board out of broken china pieces. Ah, the oujia board, last hope of the desperate to contact ghosts. Chip makes a show of it, reminding me a lot of those 6th grade birthday parties where my friends messed around with ouija boards. Then their ouija board seems to start working…

As if on cue, an old woman shows up behind them and Chip and Ash flee the house in fright. Turns out it was just Nestor playing a joke on them. Of course, as Nestor’s talking, a sheet-wearing ghost rising up behind him. When Nestor slowly turns out, he freaks out and runs all the way back to the farm.

Then the sheet meows. It was Burble all-along.

Overall, Chip was a really cute miniseries. A great story for children and adults alike as I enjoyed the heck out of it.