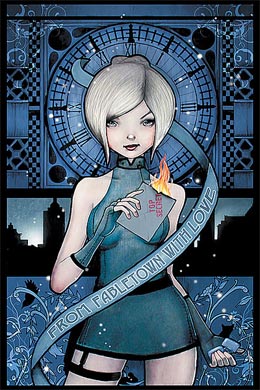 Cindy also visits Frau Totenkinder for a magical bracelet and ring. The ring can sense when she’s around magical items. Cindy and Totenkinder have a strained relationship at best. And as usual, Totenkinder seems to know more about what’s going on than she volunteers. When Totenkinder gets quippy about Cinderella being demanding and says she hopes she wasn’t this rude to her Fairy Godmother, Cindy shuts her down in anger.

Cinderella also makes a stop to the Fables Farm to visit her friends and sources, Dickory (the mouse), Jenny Wren, and Puss-in-Boots. They each touch the charms on Cinderella’s bracelet so she can summon them when she needs them. Apparently, each of them owes her from a time she saved them.

Unfortunately, once Cinderella touches down in Dubai, there is more of Fables‘s failure to deal with the Arab world. While never going to Dubai myself, I’ve heard from world travelers who’ve spent a lot of time in the Middle East, that Dubai is like no other city. But I don’t feel like Cinderella needed to be commenting on the juxtaposition of gratuitous wealth to attract Western visitors and Sharia law. In the Fables‘ world, I just wish the writers would leave giant global issues from the Mundy world alone and let us readers enjoy the Fables‘s world, whether European or Arabian. I mean, that’s why I’m reading this.

Cindy’s meeting with Aladdin was rather predictable spy-fighting. I’d been wondering when they were going to bring him into the world considering what a famous Arabian character he is. I’m okay with Aladdin as the now rich playboy who’s also a spy. As Cinderella later realizes (though I don’t know why she’d never heard of his tale), she and Aladdin had basically the same path in life.

What I don’t buy is Aladdin converting to Islam. I just don’t buy Fables being religious beyond general witchcraft or other magical power gatherings. I mean, Aladdin is far older than Islam. To me, making Aladdin a Muslim is just an excuse to talk about how Islam treats women. Or helping propel popular myths on how Muslims treat women, in general. (Hint: not everyone following Islam is a Taliban fundamentalist.) The scene where Cinderella and Aladdin spare over Sharia law is ridiculous and an excuse for a Western author to go on a rant.

Are two of Arabian fables women behind the selling of the magical items even named? (Safiya, the outspoken sister in pink, is given a name.) I mean, last time I checked, not only should these women be free, have their own agency and own story, but they should also have names. And even after correcting Cinderella, she continues to refer to them as “girls.” What the heck? If this is supposed to be a tale of women’s liberation, it’s not doing it.

After getting a confession of where their supply comes from, Safiya and her sisters are sent back to Fabletown for judgment and Cinderella and Aladdin go forth to Ultima Thule. Ultima Thule is an Arctic-like environment in the Homelands where it’s daytime six months of the year and nighttime for the other six. It’s also a world where people are forced to smile, and anyone with a trace of magic is put into prison by polar bears with guns.

Cinderella’s Fairy Godmother being behind the magical items is not shocking given the foreshadowing in Cinderella and Frau Totenkinder’s conversation early in the book. Of course, perhaps Cinderella is also the best agent to take out Fairy Godmother. Or at least catch her off guard. If there’s anyone who knows that magical wishes don’t equal happiness and that there is no happily ever after, it’s Cinderella.

I do love that Fairy Godmother’s reason for the guns is to force people to be happy because she realizes her magic doesn’t work. She’s like an evil Carebear.

I also really enjoyed that Cinderella saved the day with some help from Dickory. Dickory who made the clock strike midnight so all the magical items and Fairy Godmother’s powers would disappear. While I enjoyed the team-up with Aladdin, I was happy to see Cindy saving the day instead of him.

Of course, back in Fabletown, Crispin’s gotten himself into a pickle. He’s decided to take shoe design at the Glass Slipper into his own hands. Magic shoes. Rapunzel orders some running shoes, and she gets more than she bargains for when the shoes don’t come off. Said magical shoes run on their own. Luckily, Cindy shows up and fixes everything before it gets too out of control.

Rumor has it there’s going to be another Cinderella miniseries in the future. And I look forward to it. I hope someday that a Fables title can redeem itself when it comes to the Arabian Fables. But I’d rather just have some exploration of Cindy in the Homelands, Cindy kicking ass, and hey, maybe every once in a while she and Aladdin can have some sex.

Support this blog and enjoy the adventures of Cindy yourself Cinderella: From Fabletown with Love (affiliate link).