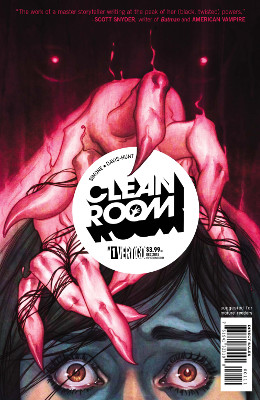 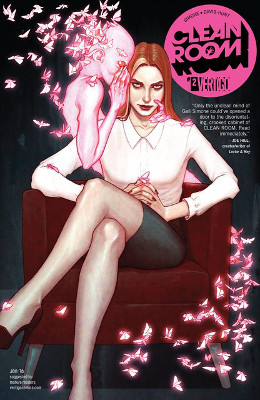 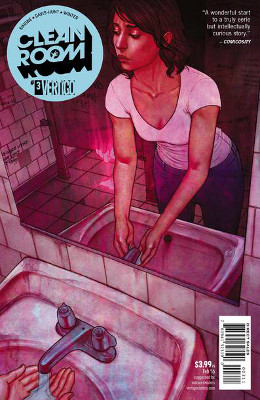 I’m really liking Chloe so far. Of course, who doesn’t adore a ride-or-die journalist, who has nothing but her mission. I too am curious about what the Clean Room is; who Astrid Mueller is and what her powers are; and what are these monsters Chloe’s seeing. You can’t really ask much better from a first issue than to keep you wanting more.

Of course, the other thing that the girl at the beginning of the book and Chloe have in common is the near death/dead for a few moments experiences. Perhaps, this is what gives them the ability to see the monsters.

While Chloe’s determined, I don’t know how forcing Astrid’s hand will actually help her. There’s one thing to have nothing left to lose, and there’s another thing to actually have a plan of attack. Or a guarantee. Or an ace up your sleeve.

Okay, I super love the concept of the Clean Room. Or really anything that makes people confront themselves or some kind of truth to their universe. Like when the Doctor and the Master both look into the time vortex aka Untempered Schism, which is a Start of Darkness that some people can survive. Which explains why Chloe’s husband killed himself and others have survived. Though Astrid’s Clean Room seems to have otherworldly things also going on and a higher-than-average mortality rate.

I find it unsurprising that while Astrid claimed they didn’t do anything to the people who left the Clean Room — no matter how bad they actually were — that those scary ass white monkeys terrorize Dwight to death. (Seriously though, Simone and Davis-Hunt, monkeys are scary.)

I’m also betting that Chloe’s going to become super obsessed with what led to her husband’s death and what he saw in the Clean Room. Which given what we found out about Dwight, Chloe may just want to stay off that road.

I do look forward to what I assume will be Chloe’s team-up with Avil Demarkos. At least, I hope we’re introducing him in order to have another detective (this time literally) on the case. Maybe he’ll be the Scully to Choe’s Mulder.

Aliens? I’m all together sure I buy that either. Not sure about this guy’s truth or his delusions, especially given that his life is okay. Or even Hell? A Hell which samples people’s DNA and tortures them?

However, what I do buy is Astrid’s influence over the setting. I buy her being obsessed Jonas Kempf, the man who ran her over twice without remorse. (She was the little girl in the first issue.) I buy Astrid believing he went to hell, but manages to come back in some kind of demon form in order to destroy others. (Of course, that makes Jonas not a real person, but a possessed person.) Possibly I’m more interested in this book if it’s aliens. Too much hell recently.

Wow, the crow guy just killed Chloe’s only friends and perhaps the only upstanding citizens in this book.

Killian Reed may be like every one of my favorite lesbian stereotypes wrapped up in one. Especially in that she propositions Chloe after ruining her day and the buying waffles and ice cream. Now there’s someone who knows the end is coming.