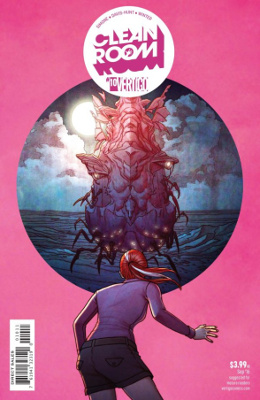 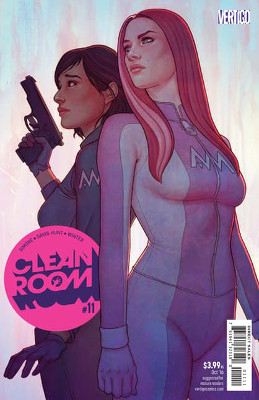 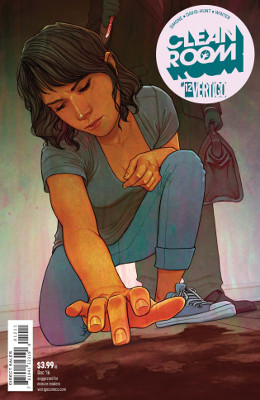 This is some fucked up shit. Like I’ve read many Simone comics, and this book surpassed the gross and scary by far. Like nightmare worthy shit.

Not surprising that Pete and Wenuka are working with the Surgeon. (Or possibly the Surgeon and Wenuka are the same person.) Poor Duncan. Hopefully, Killian will figure out what’s going on and destroy them. Destroy those nightmares.

Avil and Chloe are still the cutest, and they will likely be the ones to save the Earth from turning into a Hellscape. I’m not so sure Astrid’s protections will really keep them safe. But for now, I’d be using that unlimited credit card.

Astrid needs to get her shit in order. Miss Capone and her struggle with her shoes and the snow was pretty hilarious. Simone nicely builds her character with the contrast of the heels and snow struggle with her story about living in a cardboard box.

I’m ready for some hero action.

Oh, Duncan, poor Duncan. And poor Killian, who think she’s been betrayed. She has, but also it’s being forced and oh so sad.

Miss Capone is a great character. I love Astrid testing her, only to find out that there’s another sniper.

It’s about time that we see Chloe taking charge. I like her forcing Killian to take her into the Clean Room. Where they’re torturing poor Spark.

Astrid better buck up before those white guys take everything from her.

Not surprised to see Astrid completely take back control of her business. I don’t know how the demon creatures think they can hide from her when she can see them always. Also, of course, one of those terrible men was really one of the demons. Also, if I ever have a company, I need to make sure I too could fire the entire board.

It was interesting to see Spark before the exorcism. Doesn’t seem that the little girl survived it, even if he did. Though we don’t know the full ramifications of being demon-possessed. Astrid did kill her father after all. And her niece is a demon creature, which says people must be born that way. I have a feeling Simone’s next arc will answer this question.

Chloe’s developing her superpowers. Just kind of wish she didn’t get them by trying to kill herself. Nice to see her be able to control the Clean Room. Even if we just found out that the Clean Room is some kind of techno demon pet and time travel machine.

I’m glad Duncan is still alive, even if he had to be healed by Spark. Hopefully, they’ll be able to rescue his husband.