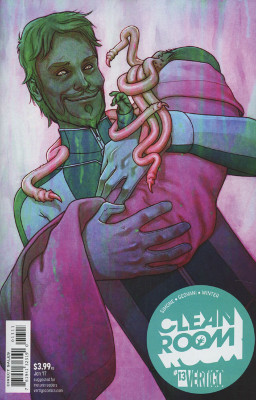 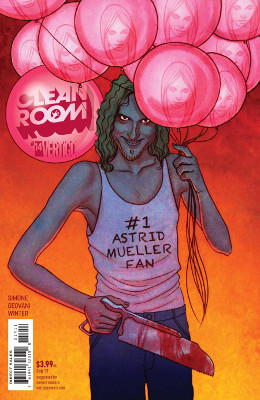 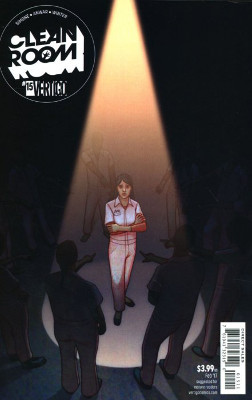 This book is typically pretty scary, but I don’t know if Geovani’s art makes it less so. Davis-Hunt’s super clean lines made it more realistic, more creepy.

Yeah, Astrid cannot get rid of Killian and Duncan. Especially when she realizes who else is there that she might replace them with. They are not Duncan or Killian. Not at all. Though the staff was pretty happy to see Duncan and Killian go. Probably because they are jerks. The best kind that make great characters.

Chloe will never not get sucked back into everything. She’s too curious. She wants to know what happened to Phillip and who these creatures are. She wants her revenge.

I’m glad that Astrid clarified that they don’t really know if the evil creatures are demons or aliens. Or exactly what the hell is going on, despite being able to see them and studying them for many years.

The baby is creepy. Mr. Warren very much is a new creepy character. But we haven’t gotten resolution on some of our monsters from the earlier issues.

Astrid’s #1 fan, however, probably the most frightening aspect of this.

This book continues to be one of the creepiest and sickest books out there. If 2017 is the time of “hold my beer,” then Simone is handing hers over at every corner and upping the game.

Astrid is correct that the aliens/demons/whatever’s obsession with destroying humans could be the key to their downfall. Since they have some kind of sentience to them, then there’s some reason they want to destroy humans. It could be because it’s just fun. But certainly that human bridge dream and their attempts to destroy Astrid and company speak to specific revenge elements.

Babies are actually a great way to break into and break down human society. Especially as we see Chloe reacting badly to the idea that she might have to kill Derica. Even though she knows exactly what Derica is.

You’d think Astrid’s brother Peter would be a little smarter than to fall for Mr. Warren’s tricks given their childhood.

Artus is perhaps scarier than the demons/aliens. Especially when he can manipulate the room and outsmart (at least for the moment) both Chloe and Killian. Though are they stuck inside a memory? Or the past? Because if this is truly the past, then Artus may end up dead.

Geovani’s art seems to be molding to be much more in line with Hunt-Davis’.

This is an interesting look into Astrid’s organization from the perspective of someone who joined it the regular way. Chloe bursted into Astrid’s domain and demanded answers. She also had a special skill.

Mary, on the other hand, is the type of person who would join a cult. Because she’s vulnerable and in need. She also needs lots and lots of therapy, which Astrid’s organization does in its own way.

Simone did the reveal in a good way that Mary’s haunted by her husband’s death because they were supposed to kill themselves together and she didn’t jump. Astrid’s lie was kind. Also, it becomes clear that Mary doesn’t have the power Chloe and Astrid do. She’s just haunted and needs comfort. Which this reader thought she did have the power until the end.

Anwar’s art was great. I liked the panels framing Mary and her husband’s relationship. All the details were great to move along the story and quickly get to know Mary and her life.