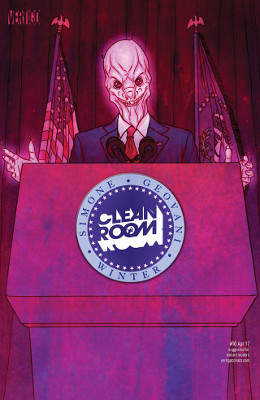 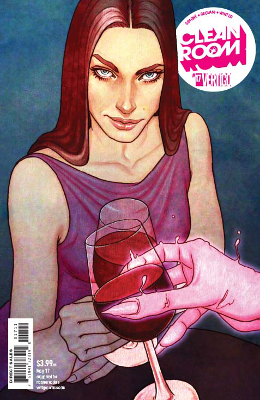 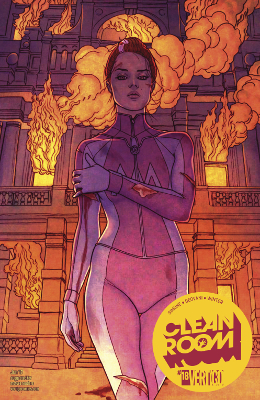 I’d gotten behind in reviewing this because this series had simply gotten too scary to read before I went to sleep. (Nighttime is when I do the vast majority of my reading in order to make sure I’m away from screens at least 30 minutes before I try to sleep.) Of course, now the series has ended.

This issue feels like the moment Simone realized the series needed to come to a wrap. Artus as a big bad doesn’t seem quite right. Of course, the queen is a starving baby. It seems like a fallacy and giant risk to have to depend on human care, and that the queen demon would want to take over an adult body. Even if her emotions cause her to try to destroy Astrid by being her niece.

Nice to see Duncan get his revenge with the surgeon. The Haverlin brothers are pretty great. I love how they just take out a demon by hitting it with baseball bats. (Unlike everyone else who has to use guns and other things.)

I hope Mr. Raven gets out. I rather like him.

Capone continues to be her awesome self. Of course, she recognized those guys as fakes immediately. Of course, she’s able to take them both on and kill them. And then go save Anika.

Maybe Chloe got some closure having ghost sex with Phillip. But may not. She and Killian do have to figure out how to get out of the past. Or whatever is going on. It’s clear that they still don’t really know how the Clean Room works.

I get that Simone wants to show the outside world and what they are experiencing as the demon/aliens/whatevers decide to reign down their terror. However, it feels a little late to the party to introduce new people. And of course, the kid’s evil. That’s kind of the MO in this book.

The evil queen baby is so absurd. Simone both breaks down the horror and ups it with the baby. That apparently, if Astrid exercises her, they will save everyone. I don’t really know how that will stop the rest of the creatures and do anything more than temporarily mess them up for a while.

I guess what I realized as Death came for Artus is that I’m not sure if this world’s mythos holds up. Especially as Simone ends this book quickly. Or it feels like a quick end brought on by probable low sales.

So this is how it ends. Astrid pinning everything on herself and protecting everyone of the knowledge about the demon-aliens. The ones who we really never find out where they came from, but it looks more like they’re aliens than demons. They’ve just been on Earth for a very long time.

What we find, of course, is that Astrid is lonely. Astrid never had any family. Her father was replaced early on by these alien-demons. She always had to protect herself with her cult, and only showed any aspects of herself to the few trusted lieutenants and Chloe, who became her unlikely best friend.

At least Capone went down her way, take out the baddies.

Of course, the Professor remained gross until the end of this book and shot the ship down. Though some serious unexplored territory there with that ship being a living creature itself.

I approve of the queen alien-demon-baby telling Astrid about how they wrote half those religious books. Hahaha.

It was nice to see Spark come back in the end and save the day. Of course, this means one of the brothers is actually dead.

I’m surprised Astrid didn’t keep Chloe around, and it would’ve been nice to see some aftermath with her boyfriend and Killian. Yes, thank you, Simone, for putting some polyamorous relationships and bisexuals in your books. Appreciated.