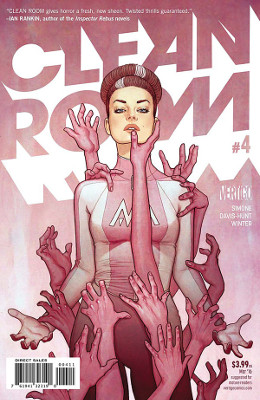 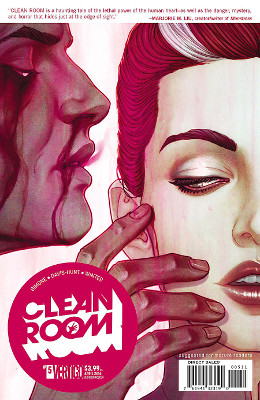 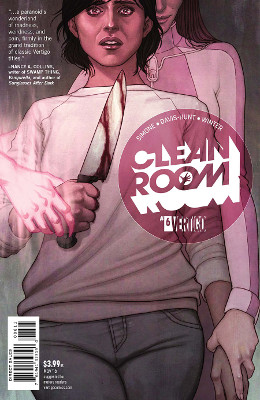 If Astrid spend her entire life trying to bring these creatures to our reality/dimension/planet to understand them, it makes sense that her book would conjure them up and have one plant itself in Chloe’s house. To try to make her kill herself. (Somehow I don’t think that will be happening.) Is she only “seeing” the creature now that she’s been in the Clean Room?

Glad to see that Chloe’s neighbors were only hurt and didn’t die.

I’m curious to know more about the politics, celebrity, and mission behind what Astrid is doing. On one hand, rich celebrities are going to give her the money to do what she wants, but on the other hand, Killian become clean up. Also interesting that clearly Killian and Anika are the same person.

I’m not as convinced as others that Astrid is evil. Selfish, yes. Complicit in bringing harm and death to others, yes. But not an evildoer. If the cloudbuster is a canon meant to kill aliens, this could actually make Astrid a hero of sorts.

So Vertigo ads are calling the creatures in this book demons, so I guess we’ll be going with that. I’m never a fan of spoilery or “clarifying” advertising happening. It should be more clear in the writing.

Since Chloe’s demon Spark couldn’t convince her to kill herself, it’s now helping her? Or at least trying to save its own hide from the Surgeon. I do love that every time Chloe runs from her house, she first grabs her cat. Definitely something I’d do.

Astrid knowing that the demon would infect Terry was interesting. Same with her breaking Terry in order to get the demon out of him. And that she didn’t really do the same with her client before Terry thought it was too much and killed him. But nice to know that you can get rid of them. Also great to see Astrid scared in that she knows they must fully get rid of this demon before either her or Tony come out of that room. I do like the idea that Astrid is messing with powers she doesn’t fully understand.

Killien continues to be a total badass and definitely becoming my favorite.

While we still don’t know if they’re demons or aliens, if they are prisoners, they are probably evil. Probably very evil. And definitely with some kind of leadership. Makes you wonder who build the prison and why they would do so apparently right above a planet full of intelligent creatures.

Also this begs the second questions, which is what is Astrid trying to do? Does she want to kill them? Or does she want to use them? Or find the prison builders? And why is she seemingly educating people, even if like Philip, they end up killing themselves?

Chloe continues to be very lucky. And same with her nextdoor neighbors who’ve fought and been possessed by demons/aliens and lived to tell the story.

I really want more of the detective and him meeting Chloe for their X-Files-style adventures. Astrid could be their Smoking Man. That would make Killien Krycek for sure.

Each issue has been super creepy, and it definitely stays with you. Simone and Davis-Hunt are doing a great job.