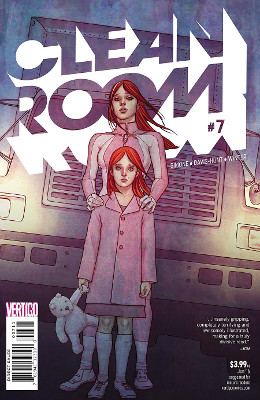 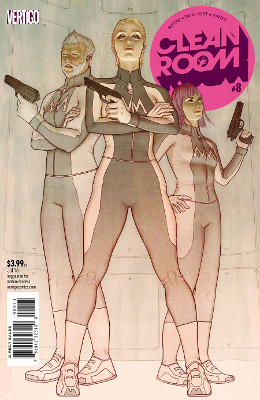 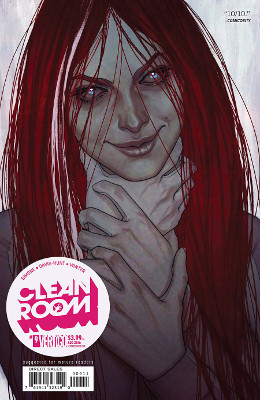 This may just be the most gruesome issue of Clean Room so far, and that’s say a lot. Davis-Hunt’s clean art style with the gore presents such a crystal clear image. I think it makes this book a lot more scary than a sketchier, creeps-around-in-the-dark style of many other horror books.

Interesting that Astrid refers to the creature features as “entities” and doesn’t seen to quite have a label she’s fully confident in.

There are so many points where you think Astrid is over her head — like the creeper in the car or the meeting with the Surgeon — where she comes out the otherside. Of course, we also see her not hesitating to hurt Anika. Or keep her on unending life support of a kind. It will be interesting to know just why Astrid needs to keep Anika alive to continue her work. Especially since Astrid can see the creatures already.

I assume, at some point, we will see Astrid kill her father. (Or can Astrid see the creatures because she is half one, if her father was one. Though it’s unclear how possession works.)

Oh, Chloe, apparently she’s special. I’m so glad she’s finally hanging out with Avil Demakos. Those two are going to crack this case wide open. Not to mention, they both have mystery-solving jobs and personalities.

I did not see Astrid dying coming at all. I thought she’d be rather invincible given all things. Mostly that thing where the demons/aliens/hell beasts tried to kill her before and she avoided it. Or that she’d have some kind of super healing powers by now.

Poor Killian thought she was going to be running the entire show if anything ever happened to Astrid. But apparently seeing these creatures fully is rare. Rare enough that Chloe must replace her. Killian also might be burnt when Chloe shows up with her dorky boyfriend Avil.

Chloe and Avil are so dorky together. Cheese cheese soup with sweet pickles may be the most depraved thing Simone’s ever written about.

Now I want to know more about what Chloe knows about Spark. Somehow I don’t think she’s going to be as shocked about this entire hell thing. Though I wonder if it’s painful for Renee.

I feel I’ve been a bit remiss in my reviews of Clean Room in talking about Davis-Hunt’s art. It’s fabulous. He’s amazing at understanding body language and facial expressions and how much of what people communicate is through how we move. Chloe has some amazing annoyed bitch face in this issue, same with Killian’s grief and surprise and Avil’s dorky nature.

This was a dramatic issue. Oh, Spark, he was definitely going to die either way. Either Astrid shooting him or contracting Astrid’s death. I do appreciate the twist the exorcism will cleanse the demons. Or whatever they actually are.

Somehow I think Killian has downgraded Chloe a lot in her book. Even if, in the end, she did save Astrid’s life, Killian doesn’t seem like the type of person to put a betrayal so easily behind her.

I’m not surprised to see that Astrid has some dudes in her organization who want to take it over. At least for their own self-interest. How dudely and patriarchal.

I’m really interested to learn more about what Astrid found in the desert. Also why not all her followers, particularly those who are super close to her like Killian cannot see the creatures.