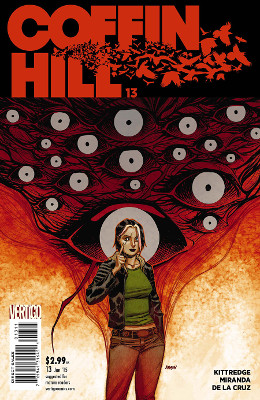 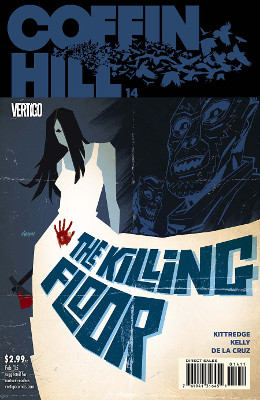 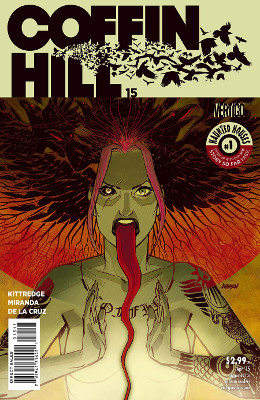 This is the issue where all the villains take off their masks.

In the past, we have Eve going head-to-head about Doyle and his black magic. (I’m going to assume the black magic is the reason why he’s back in the present.) I love how she’s all into the fight. Eve’s going to kill him. And that’s how the book sets her up. Kittredge has taken Eve on the journey to become her reluctant heroine.

In the present, Lacey and Bianca are taking on Patrick. And Officer Wilcox continues to be the only competent officer in this story.

The reveal that Eve had been killed by her ex-roommate, even after getting away from the Ice Fisher was pretty powerful. I do have to say this seems like it should’ve been revealed a bit earlier. Definitely makes it more understandable, besides being on the run, why she came home to Coffin Hill and why her life is much less together than you’d think.

While this is an interesting background story about Coffin Hill and Eve’s ancestors, it is perhaps not the best time to interrupt the story. You know, when we want to know more about Eve. Even if we’re given backstory about Emma Coffin and her wrath.

I’m going to guess that Lorelei is perhaps Ellie’s sister or even her mother. Or perhaps a cousin. Doesn’t seem that Emma would let someone live who wasn’t related to her — or at least didn’t possess some power of their own.

Kittredge definitely does a solid take on the horrors of a Mason-style family. In case, you forgot she was writing a horror comic book. The horror, edgy humor, and body count certainly all add up here.

Karen makes a great character for the audience to see the story unravel before. You can easily see how she was charmed by Jake and fell in with a “bad crowd.” The others seem much more unrepentant about their killings and other reviled behavior. Because we, the readers, know what house they roll up to, we’re waiting to Jake to be killed in horrible fashion.

Kelly did a good job at filling in. I liked some of his details, especially those tied-up rats above the door when Lorelei lets Karen inside.

Constance (Lorelei?) was instead Ellie’s best friend. It’s interesting to see that the Coffin’s reputation isn’t the only thing that keeps them from having close friends. (Though in those early issues Ellie and her husband were throwing quite the party.) But I am a tad suspicious that she just didn’t put a spell on her mental hospital roommate in order to get her own room. Even if it seems like a rich family could afford to have their relatives in a single room at a hospital.

Emma isn’t really going to be hiding behind any magic tricks anymore. At least with Eve. Though I do hope that she has more motivation somewhere than just wanting to burn down the town. I mean, the people who killed her are long dead, even if they never got their justice for killing her. I’m just not a fan of the whole blanket evil wanting to destroy the world plots. Too many comics? Too much genre movies and TV? Give me reasons and motivations over anything else.

Nate’s just kind of a punching bag in this story… Which makes him rather boring. Though Eve seems convinced that Emma can’t hurt him.

Somehow Leland Starr seems more bark than bite. He definitely couldn’t stand on his own against Ellie. Good thing Annabelle Wilcox will be continuing to do the actual policing in this town.