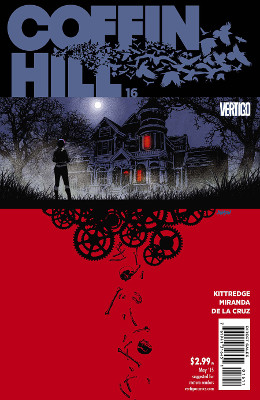 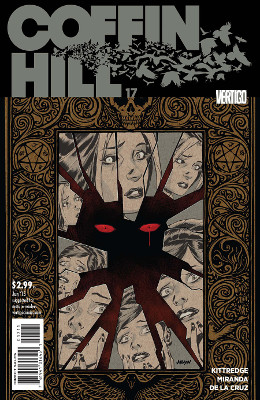 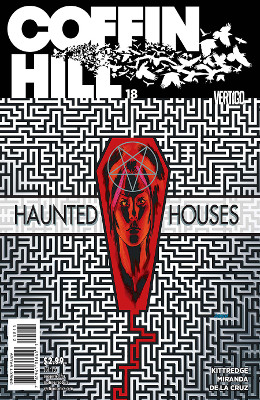 The Coffin Witch is definitely upping her game. I do like that this next plot will deal with her directly. Seems about time.

I actually kind of hope that the Coffin Witch takes out Patrick. (But I have a feeling that we’ll be waiting yet another arc for that, since he’s tied to a group of witch haters. Only one plot at a time.)

Nice to see Eve and Bianca together and working toward taking down evil. We’ll see how this works out, but it’s nice to see ladies working together. Especially since the big bad is also a female character.

Would be nice to learn more about Eve’s death and what that means in the fight against the Coffin Witch.

More Wilcox! Anabelle is just the best character ever. Nothing good can come of some super leaky pipes. Andy’s “room” is creepy as hell. With that bed and sad teddy bear and ball. Of course, there’s no way that ball would still be fully inflated on it’s own. Now that’s just evil.

Love how Kittredge weaved together both Ellie’s confession about her friend and Shane’s massacre of his family. Ellie definitely needs some redemption and responsibility for what happened to Lorelei.

I hope we’ll see more of Anabelle, Ellie, and Eve being a crack team to take down the Coffin Witch. Especially with the ominous police car, actively abandoned and near the forest.

As we quickly move toward the conclusion of this book, Kittredge’s plots become much more concrete as do Emma’s actions as the Coffin Witch. Clearly, Andy is the secret child of Loreli, the one she was secretly pregnant with in the mental hospital. Or something.

Wilcox continues to be the best. All the dang time.

It was nice to see Ellie trusting Eve to take care of what she never could herself. Oh, that house and Emma’s domain, kind of cliche that it’s the basement. I do find it odd that we haven’t had more stories about Eve growing up in the house or Ellie being there all those years. In fact, this book has somewhat largely avoided the Coffin mansion as a setting for most of the story.

Glad to see Danielle, as 90’s dead as she may be, being a smart ass to Emma. Perfect.

I adore the librarian lady and her sharpness. Her character design is great.

Time to take down the Coffin Witch in Coffin Hill Vol. 3.