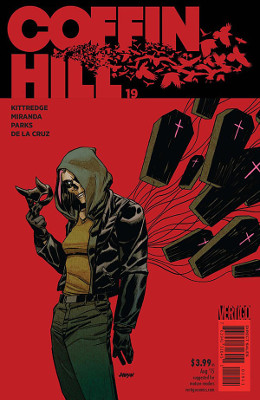 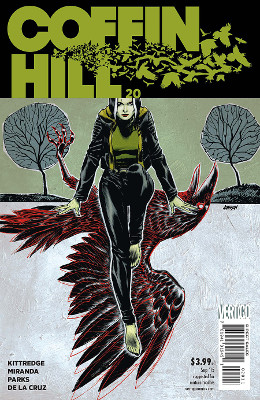 The more this book’s about the wrap-up, the more I consider that I probably would’ve enjoyed Coffin Hill more if I’d read it in graphic novel format. Mysteries are hard to build in the monthly format, especially when I don’t often read comic books regularly and get far behind on titles.

Even if Eve thinks she knows what she’s doing by giving herself to Emma, I’m about as convinced as Constance is. Emma has a lot of life forces she’s accumulated over the years. That’s a lot of power.

(Also, I’m kind of assuming we’re just entirely dropping the whole plot with Patrick out to destroy all the witches in the world and being manipulated by Emma to take out Eve.)

I do find it a bit confusing about why Emma would want to kill Eve. Wouldn’t she want the Coffin line to continue? Does that continue to give the family power? Of course, it seems like all she needs is a body and then she can be the living Coffin forever. She’d likely enjoy Eve’s body a lot.

Wilcox isn’t ever going to give up. But I’m not so sure that I trust Lee. He suspiciously always turns up at just the right time.

I have to give both Kittredge and Miranda major props for ending this book in a solid way given that the book was canceled and that they were told there would be 21 issues. There’s no breathing room in Coffin Hill #20 because they can’t waste the space.

The whole “it’s Andrea” thing was a little over-the-top and wrapped everything in a nice tight bow. I’m glad that Wilcox was able to take out Andy by herself instead of it being Lee, who’d already come to her rescue last issue.

Oh, Emma. No one thought that she’d actually take a body that’d been a coma for that long and make it easy. No, she spent a short time in Andy’s body instead. Which wow, Eve, wow. Talk about never going home again.

I suppose at least Eve got the guy in the end. (I did appreciate it being Ellie who went to Nate to drive Emma from him.)

Liked that Lee was Lorelei’s kid and somewhat of a happy ending came out of it.

Finish out the mystery with Coffin Hill Vol. 3.