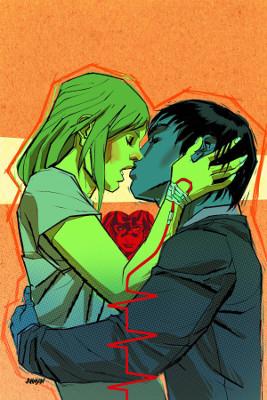 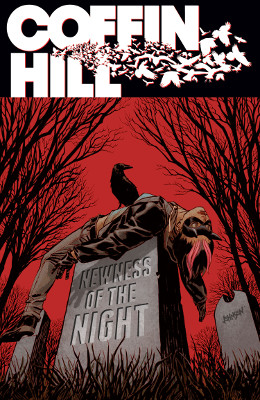 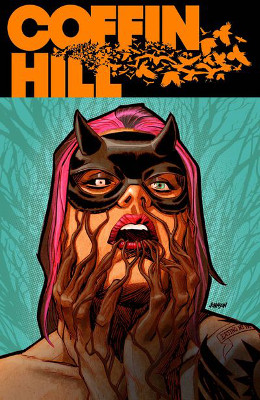 Not a huge fan of this love triangle. Or kind of love triangle now that we find out that Mel isn’t back for real and she’s actually infested with whatever badness is happening. I am surprised that more medical professionals aren’t also in awe of her full-scale recovery.

Ellie saying that it always comes back to blood and then Mel cutting her wrists in order to use blood magic with Nate was a little too heavy-handed for me.

I just really don’t like the plot where girl sleeps with best friend’s boyfriend. Maybe. Because she might’ve been a virgin, but we’re still slut shaming. So whatever. Hope things actually get complex.

I’d much rather hear Ellie and Eve trade verbal blows that give us more history.

Definitely the weakest issue so far. I’m hoping to dive more into the mystery and the history of the Coffin family. Instead, Gina and Rob and more about Bianca’s disappearance, plus a flashback to Nate’s addict brother Patrick.

I’m taking some bets that Patrick and his revenge is going to be some catalysis to the evil coming back to Coffin Hill. It was certainly dormant for a while until the night Dani died. Someone declaring vengeance and then all hell breaking loose. It sounds like more than Eve’s teenage rebellion against her family.

I’m kind of betting that Rob’s some kind of red herring. Or he’s under possession, ala Twin Peaks. (Though let’s hope for more closure in this story.) Though I find, if possession, these stories of abuse never really work themselves out. And I feel as if Kittredge could find a better avenue.

Of course, the issue with Coffin Hill is that the only character with enough characterization is Eve. The rest of them are shells of characters. I want to know more. The story needs it as it’s sliding downhill.

I suppose that we’ll see how #6 and the end of this arc comes out.

So Rob turned out to just be a super creep. Maybe he was under the influence of whatever nameless evil creature Eve killed. But he remained just evil and abusive.

Nate’s confrontation with the creature posing as Mel seemed equally just as shallow. There was no reveal about more of his character. Not even a sense of betrayal. Especially given his previous actions toward Eve as a response to what Mel told him. At least, Nate should be upset about sleeping with a demon creature.

There was a lot of focus early on in the story about multiple missing girls and women around Coffin Hill and in the forest. Suddenly, they’re all there, kind of intact, but naked. Again, some poor closure.

While Eve’s obviously a character who hides her feelings and motivations from others, Kittredge hides too much from the readers. I wonder if this is one of those books-to-comics writing issues where it’s very different to write from one character’s prose point-of-view than to make a comic book from it. While certainly Eve could’ve been very cold about certain things, Dani was right to call her out on not feeling.

And oh my god, I so want to know more about her mom and the bargain she made with the creature. The kind that Eve turned down.

Dive into Eve’s world, and buy Coffin Hill Vol. 1: Forest of the Night