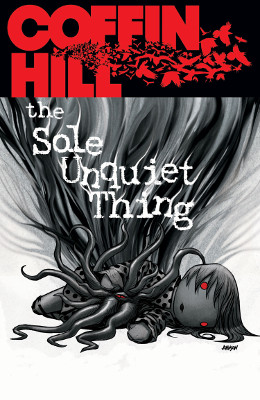 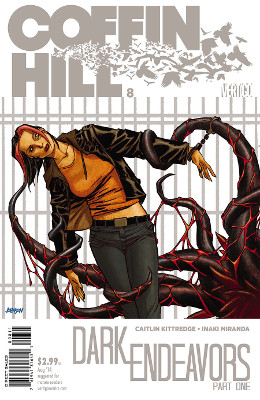 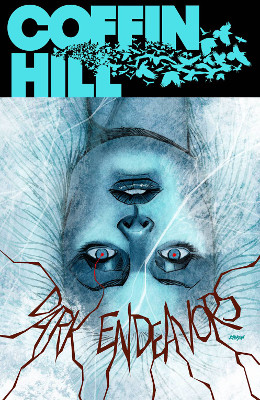 I’m happy to get an issue about Ellie and her experiences as a child. Since she already admitted to Eve that she was too weak to resist giving in, we know her ending. Or at least can make some guesses.

It was nice to finalize that nothing on Coffin Hill stays dead. Did Ellie see Evelyn as a little girl because she wanted a friend? Or because of her powers?

I thought the story about the nanny burning her and then the story about her father was perhaps just a little too much. I guess we were probably supposed to see that Ellie’s father wasn’t a terrible man in that he only killed bad people?

Mercy’s name is a bit too heavy-handed. However, you can definitely see where Eve gets some of her spitfire from. Mercy won’t be putting up with any shit.

I assume at some point we’ll be exploring this Harvest thing in more concrete details.

I feel like this issue started getting back to what drew me into the book: the mystery and building up of the characters.

I loved the flashbacks of Eve as a cop in Boston. And how clearly, life wasn’t going to just let her be a cop in Boston. Nice also to meet Greg Frost fully and Doyle Donovan, the detective that Eve’s being charged with the murder of.

I still think the point-of-view of Coffin Hill is shaky. I assume Doyle’s presented as an arrogant ass, who thinks he can get somewhere by promoting Eve, because this is what Eve thinks of him. And I assume that Greg wavers in and out of being nice to Eve and then a jerk because she’s not sure what to make of him.

I wonder if the Ice Fisher is going to be someone we already met. Eve’s pretty matter-of-fact about being a witch. Usually, witches (pagans, wiccans, etc) are more reserved, especially in conservative environments like police forces. But, on the other hand, the Coffin Witch is apparently pretty famous.

Interesting that Bianca and Lacey label themselves as the only witches left in town, besides the Coffin women of course. Did the others leave? Where most of those women dead when Eve finally came to defeat the monster?

I’m still greatly enjoying these flashbacks to Boston and Eve really being a cop. It’s a little bittersweet as I know the Ice Fisher will be her one and only case. Especially since all signs point to Doyle being the serial killer. Especially with the new clue of both her and Greg suspecting that the killer’s a cop.

Or it will be the Ice Fisher who kills Doyle, then pins the blame on Eve.

I so called that Patrick would show up for his revenge sooner or later. Kittredge wasted no time confirming that he’s still an asshole. Of course, Nate’s drinking too much in order to really be able to properly deal with his brother. Or think to warn Eve.

I’m thinking that once Eve gets out she’s going to have to kill Patrick. And that’s going to be something of a major mess considering Greg wants to throw her in jail forever for killing Doyle.