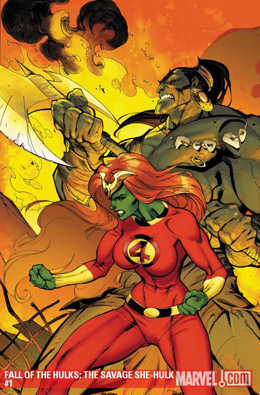 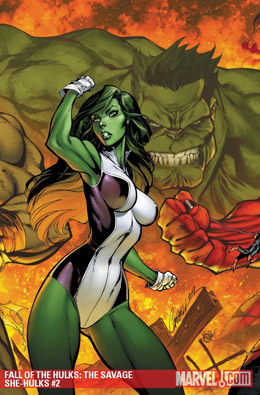 Before we get into the comic reviews, let’s talk about these awful covers. Covers turned into a poster. (Note: I am going to ignore the guys as they’re not the focus and are not as offensive.) First, there’s Lyra and her missing internal organs. No woman’s stomach looks like that unless she’s had her ribs, kidneys, and spleen removed. Then there’s Jen and her balloon boobs with nipple action. Plus, she looks like I could take her in a fight. Those are wrinkles on her arms, not biceps. And then we come to Red She-Hulk, her costume, and her “talons” as apparently, there’s no meat on her fingers. But what’s really offensive about this picture is Red She-Hulk’s nose. It looks like Red She-Hulk and Michael Jackson had the same bad rhinoplasty. She should really sue her doctor.

Fall of the Hulks: Savage She-Hulks #1 by Jeff Parker

Jeff Parker’s doing a good job at pulling the bits and pieces to the Fall of the Hulks together. I love the action; and I think Parker does a good job with the materials given. None of these have hit it out of the ballpark, but that can be nearly impossible when working in tandem with at least two other writers.

Of course, I called the reveal of Lyra really joining the bad guys as a rouse to look for Jen a long time ago.

Nice to see that Lyra ran into her mother Thundra. Of course, before Thundra went back to her people and gave birth to Lyra. I kind of wanted Thundra to shout, “Spoilers” at Lyra.

Once again, we see a out-of-control Red She-Hulk. Which I find troubling, but we’ll see how the plot pans out.

Fall of the Hulks: Savage She-Hulk #2 by Jeff Parker

Finally, Jen’s back in the action. And she gets clothes, more covering than just her tiny purple bikini. I figured that her gamma powers couldn’t really be drained too much.

I’m really happy that Boudicca is up and running. I’d missed that snarky little computer. Plus, the snarky computer plays nicely with Lyra’s personality. They’re like an odd couple of sorts.

Jen slapping Lyra and telling her the truth about Thundra was great. I figured Jen would anger, considering her friendship with Thundra. And I loved Jen trying to get the Red She-Hulk to join them.

The part I did not like was the rewriting of Jen’s history. Seriously, usually Parker’s so vigilant when it comes to respecting older comics. I felt like some junior editor got Jen’s history wrong and gave the synopsis to Parker. Jen’s mother was the one killed by the mobsters. Jen’s father, on the other hand, in his role as Sheriff of Los Angeles helps Jen, the D.A., put those mobsters behind bars. He also comes into conflict with the Savage She-Hulk, only later to realize that She-Hulk’s good and his daughter. Some of my favorite She-Hulk moments involve her relationship with her father. Fail to Parker for erasing that.

Fall of the Hulks: Savage She-Hulk #3 by Jeff Parker

I love that this issue starts off with Jen teaching Lyra how to guide her body through a fall. Just like a missile. A missile of Hulked-out muscle. This scene does a great job at establishing how Lyra and Jen’s partnership will work.

Of course, all the Hulked-out soldiers are just ridiculous. But as is really this entire Fall of the Hulks storyline. I do love how together, Jen and Lyra figure out how to temporarily bypass the Solider Hulks’ programming and get them to fight each other. I had a few more eyerolls when the Hulked-out Heroes showed up. Of course, Jen was pitted against the Thing. But I did find giant fish Namor and Red She-Hulk’s fight rather amusing. “Imperius RAHHHR!!!” Yeah, sometimes I’m easy like that.

I love Red She-Hulk with her resolution never to be controlled again, and Lyra saying, “We will fight…like women.”

I adored the added-on ending with the sentimental message from Lyra to Thundra. Earlier, Lyra said that the happiest she’d ever seen her mother was after they defeated the savage men in D.C. Of course, it was really because Thundra found the smashed Boudicca with a message from Lyra. Lyra saying she’d found Jen and that she loved her mother. Given Thundra’s encounter with her grown-up daughter, it was probably wonderful to see a positive message from her.

Plus, jackalopes with laser eyes, ftw.