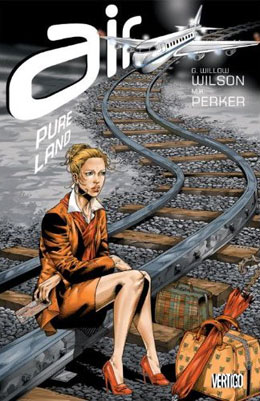 I felt like Wilson made it over her sophomore slump with Pureland. (Not that I didn’t think Vol 2 wasn’t good; it just wasn’t as fabulous as Vol 1.) We’re back on track to Blythe’s story, to the story of what’s happening with the hyperpract technology.

Blythe here causes all the problems and causes all the saves of herself and other characters. Okay, the Gypsy Prince stalks her, takes advantage of her, and then plots to kill her. But… Oh, yeah, there’s one problem Blythe doesn’t solve, but Amelia does instead so I’m cool with that.

I can see why Blythe sleeps with the Gypsy Prince in her frantic search for Zayn. Of course, the Prince does roofie her. But I’m still not sure if Wilson meant it to be rape or just bad judgment when Blythe does sleep with him. Yeah, Zayn was hurt, but seriously, I’m so with Amelia on Zayn just being a jerk.

In many ways, Quetzacoatl is just as manipulative of Blythe in her weakened — by the drugs and by the emotions – state.

Blythe’s trip to Pakistan was a little odd. I love the concept of the MetalHead Jihad led by Zayn’s brother, Mohammad Sad. In Wilson’s Pakistan, there’s an uprising of liberal Muslims against the Taliban or, as Mohammad Sad and co refer to them, “the assholes.” And the Metalhead Jihad condemn Western intervention with smart bombs. Obviously, Wilson’s playing very much with current events even in a world full of magical realism.

I also enjoyed how even though she lived his life, Blythe still has doubts about Zayn’s loyalties. If nothing else, Mohammad caring for Blythe during her overdose and having the Metalhead Jihad guard her plane proves that there’s good in their family. Loyalty.

Amelia became my favorite character in Air due to her part in this. I love the idea of Blythe as her heir. The flashbacks to Amelia running away from love via flying make her a great contrast to Blythe. Amelia’s also older, wiser, and more mature than Blythe.

However, I like that Amelia learns something about love — very passionate love — through tracking down Zayn in Siberia. I also like how she has the mind to kick him in the teeth. What I don’t get is why he didn’t understand how she tracked him down if he knew enough about the technology to be tracking it.

I feel like Blythe’s overdosing, her iconography addiction, and her love of Zayn show what a powerful emotional character she is. How indulgent she is in her emotions. Especially when she’s not under the haze of her meds or working day in and out. There’s no doubt that Quetzacoatl and the Circle are either something much more powerful or a powerful figment of Blythe’s imagination.

I suppose all things are balanced now that Zayn’s been in Blythe’s body. I do like the message of the body-sharing — you can’t forget your past — and the message about not being able to get away — you can’t run from your life and destiny.

But I do think Blythe’s addiction is just another way to keep a too powerful character under control. Wilson made the mistake a lot of comic writers do; they make a character who can destroy/conquer her enemies far too easily and that doesn’t make a good story. Well, I hope this addiction story goes better than some of the others I’ve read.