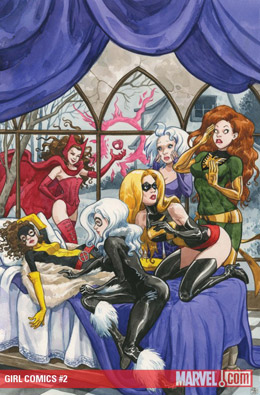 Like I mentioned in my post reviewing Girl Comics #1, I love the concept of this series. I love this as an anthology of women authors and artists. I love the spirit, even if not every story rocks my world. Say what you will, but it matters that Marvel Comics took the time to do this.

Jill Thompson’s cover is really great. I love the fairy tale aspect. I love that the heroes and damsels-in-distress are all the women characters.

Once again, they did a great job with some history lessons about women working at Marvel Comics over the years. This one features June Tarpe Mills, who wrote and illustrated Miss Fury the first female Marvel hero title by a woman creator; Ruth Atkinson, creator of Millie the Model; Valerie Barclay, Golden Age inker extraordinaire; and Linda Fite, who went from assistant to writer and created The Cat. I really wanted to read the comics these women created and worked on.

Coover’s introduction continues to be just as adorable as it was in the first comic. I think next time I’m at a convention where she is, I’ll be asking her to draw me She-Hulk.

This story is a cute tale about the Inhumans. Specifically about Crystal giving Lockjaw a bath.

I like that it fakes out that there’s been an intruder. I figured someone moving that fast must be Quicksilver. A guess because the person following the destruction is Crystal.

But nope, it’s Lockjaw, and not even Gorgon can catch him when he doesn’t want to be held. And like every dog, he jumps up on Medusa’s bed when he’s all covered in mud. Of course, Black Bolt’s the one who stops him. Without a word.

Good To Be Lucky by Kathryn Immonen

Before this story, I’d never heard of Molly Fitzgerald aka Shamrock. According to Wikipedia, she hasn’t been a major character in comic books for 13 years. She has “the luck of the Irish” which is really souls of thousands of war victims who manifest themselves and affect her luck within a 20 foot radius around her.

While that doesn’t seem like a plucky, happy power, Immonen writes a light tale here. In her retirement from superheroing, Molly becomes a hairdresser. Here we see she reminiscing about her days as a superhero and trying on her old costume. It doesn’t fit her anymore.

Sue Storm comes in with sparkly, white hair: a mess from a Reed experiment. Figures she’d need a superhero hairdresser. Patsy also comes in with a hair emergency; her has been singed from a fight with a villain. Felicia brings in her niece, who’s feeling unspecial and having some teenage drama of her own. Felicia wants Molly to do her niece’s hair, but Molly’s big secret is that she can’t style regular hair.

Until Paste Pot Pete attacks the salon, and Molly gets an idea. Cute.

Doran’s pinup of Valkyrie is disappointing. The proportions are off on her body; she looks very strong in some parts and weak in others. I don’t like her face or her hair, the former looks too masculine and the latter looks like straw. I also think that overall, the pose is boring. I need some action, some fun.

I feel like every Fantastic Four villain is in love with Sue is overdone. The idea that Sue has no clue, but everyone else does, is also overused.

I do like the Thing and Johnny Storm prank calling Dr. Doom; it is amusing. But I wish it didn’t end in the revelation that he’s in love with Sue. *sigh*

On the other hand, Buscema’s art is adorable, and I think that’s her big strength. I love Doctor Doom wearing pink bunny slippers.

“Do You Ever?” by Faith Erin Hicks

This was my favorite story this issue both in terms of art and writing. I have to give it to Hicks for writing Nextwave when no one else has. You go, girl. And Hicks does a great job writing Elsa Bloodstone and Tabby (Boom Boom).

I love Elsa making her sandwich the same way she would kill monsters. So Elsa and so wonderful. Sometimes you just want a big sandwich and a quiet time to eat it.

Of course, Tabby interrupts. So very much Tabby, loud and unaware of anyone else but herself.

I love the idea of two superheroes pondering what they’d do if they were evil. Elsa would totally kill everyone and be an evil overlord. And I love Tabby’s reveal at the end, but you’ll just have to read it to see for yourself.

While I found the ads very witty, I disliked the premises and the idea a lot. I feel like this was already done in Paul Cornell’s Hey Venus! where Venus gave dating advice to various Marvel characters.

I really want an adult Mary Jane story not focused on her love life. That said, I really like the layout here; now this is how you do a splash page.

I love Miss America. Except for the belly-shirt, I rather like this re-imagining of Miss America’s costume. I like the incorporation of elements from Captain America’s uniform. Especially the boots, shield, and hat. However, I wish the background was more filled in, more engaging.

This story just didn’t grab me, and I’ll admit upfront that I don’t know if it’s because Doctor Strange is not a character I seek out stories to read about. Adria the Witch is a character I’m completely unfamiliar with.

I felt like this story assumed you to be a Doctor Strange fan, as though I’m reading a Doctor Strange anthology, not a women creators’ one. Tonally, this story seems out of synch. It’s dark and bland at the same time. I like the idea of an enchanted piano, but I don’t feel it. Likewise, the art doesn’t capture me.

I don’t care about Adria or Doctor Strange. And I’m still a little confused at just how he defeats her.