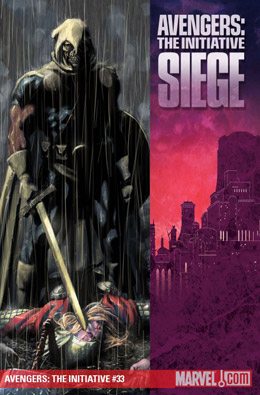 Avengers: The Initiative #33 by Christos Gage

Of course, Norman told Taskmaster to go join the others in fighting. He already knows Taskmaster serves whomever is winning, and if he gives Taskmaster partial credit for Thor’s death, it’ll go straight to Taskmaster’s head and Norman won’t have his underlings being more important than he is. Also perfect to have Diamondback stay. She’s the one who needs the bad guy glory — or to perhaps be caught by the good guys — in order to stay in Norman’s game.

I loved Diamondback’s inner monologue about seeing Maria Hill storming toward Thor’s body. Beautiful and suicidal, indeed. These thoughts work perfectly in showing how Diamondback feels about herself at this moment. I love Constrictor pulling her back and away from the battle. Yeah, he’s not Steve, but he does care about her. Just wait until she does see Steve back from the dead. I thought it was perfect that they’re splattered with Ares’ brain matter.

Tigra jumping on the Hood was the best part about the attack on Camp H.A.M.M.E.R. I love how she just let loose and isn’t scare of him. She’s just out for vengeance. Even the arguably more powerful Hood’s scared of her, calling for her death while she attacks him.

Avengers: The Initiative #34 by Christos Gage

My favorite part of this comic is how full-circle Penance/Speedball grown since this comic started. He’s become a leader. He stands up for his fellow duped initiatives, helps his old team, and fights for the first time completely on the side of good. While under Slott’s pen, Penance went to a dark place, Gage has done a stellar job at bringing him back into the light.

I feel rather bad for Justice’s Avengers not getting their full-revenge on Hood. (Granted, anyone who went to Camp Hammond (H.A.M.M.E.R.) was screwed by many different people.) But they did take over the Camp.

And there goes Taskmaster trying to make a name for himself. Of course, Steve knows his tricks and sends Bucky after him. (I don’t know if Taskmaster knowing who Bucky is would make a difference considering I assume Bucky’s fighting style’s changed since the 1940s.) This is why Taskmaster works as a better middle-to-small villain-for-hire.

Then just when Diamondback thinks Constrictor’s going to be a hero, they get lost in the big fight. And possibly dead.

Avengers: The Initiative #35 by Christos Gage

As the finale issue of Avengers: The Initiative, this issue felt odd. Yes, it tied up a lot of the on-going plot threads. However, it felt in some places really rushed, but what stories did get a few pages were really well done. The art had the same schizophrenic feeling. Sometimes, the drawing was perfect, and other times completely dis-jarring and looking like they didn’t belong.

I’m not a huge fan of the big battle shots and hero poses. And I felt that a lot of this story showed those. Or maybe just the middle of the story.

I also wasn’t entire convinced that Tigra would let Parker walk away. Of course, I’ve heard parents say their behavior changed a lot when they had children because they didn’t want their children to imitate their behavior. Maybe that’s Tigra’s real motivation. Her having the child before and quickly is really a cop-out to keep her in the bikini and not show any pregnancy weight.

Also wow, Molina’s drawing of Parker’s kid made the kid look like a 40-year-old, while making a toddler/young child appear the size of a newborn. Perspectives here.

That said, there were parts I really enjoyed of this story. Taskmaster convincing Frank that Diamondback was going back to Steve and that they needed to get the hell out. Frank’s so easy to manipulate, especially when his heart’s on the line. And, of course, Taskmaster’s going to save his own butt.

I also really enjoyed Komodo taking down Baron Von Blitzschlag. Of course, she has Cloud 9 backing her up. Hardball giving Komodo back her powers just seemed the perfect way to tie-up their story. He owed her big time. I was surprised the Baron didn’t take the opportunity with everyone being focused on Komodo to run away. However, when he pulled out his drive with all Osborn’s dirty secrets, it didn’t surprise me.

This was a pretty good series, which added a lot of interesting minor characters to the Avengers-verse. I hope other writers use them as well.