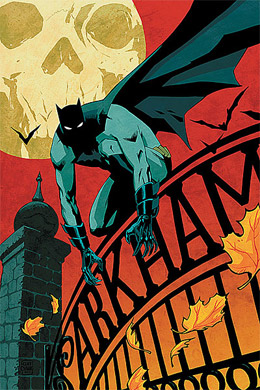 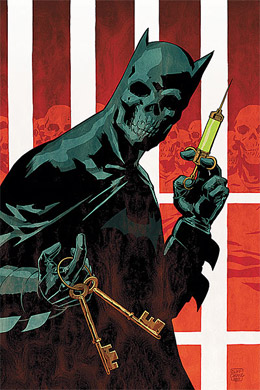 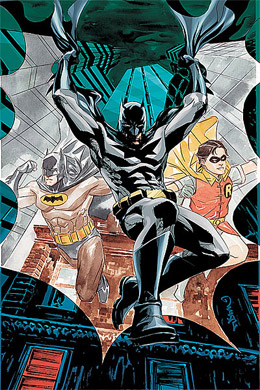 I’m not as enamored with Arkham Asylum as many of those who follow the Batverse seem to be. Or perhaps write the Batverse. But I assume these tales would not be written again and again if they weren’t popular.

I do think it’ll be revealed that the Black Mask didn’t kill those people with Batman letting him; that it was just a hallucination on his part. An obvious unreliable narrator.

I really like the mark of Cain being an idea, being something passed on like a mantel. How it’s the Vandal Savage, but with the memories dating back to Cain and Able — which we’ll put in continuity because Rucka puts it there. It’s completely unknown if the immortal caveman is really Cain.

The contrast of Helena the believer and Renee the skeptic works really well in this tale. Rucka’s used their differences and similarities really effectively in this story, and this is yet another layer.

I do like that it’s Huntress, the believer, who takes out Cain’s eye. An eye for an eye as Cain reminds them of when he stabbed or “murdered” Renee.

Nice Catch-22 set up here. Where if they kill Cain, his mark will pass onto one of them.

Predictable. Completely and horribly predictable in a way that rather bores me. I guess that the Black Mask was an unreliable narrator. Well, more likely the hallucinating narrator.

The twist with the Joker being behind it, also doesn’t surprise me. Every freaking villain in Gotham has his/her origins connected to the Joker. Well, any c- or d-villain in the Batverse which needs legitimacy in the minds of the reader. The second twist, about how evil Alyce Sinner is was another non-surprise. In a Bat-story, Batman always calls out the bad guys and about 95% of the time he’s correct. Especially when Commissioner Jim Gordon seems to agree with him.

Since the Black Mask injured a locked-up Zsasz, I take it they’re done with him over on Batman: Streets of Gotham.

I think it’s interesting that both Huntress and the Question believe the Vandal Savage-Cain will kill them. Okay, he’s immortal. He has a lot of time. But together, no doubt Helena and Renee could’ve found something to tie him up for a while. (Shoot him into space, right? Bury him? Turn him into a statue? Find his maker and reverse the curse?)

I do like that Rucka shows a Huntress who wants to go back to Gotham to ask Oracle what they should do. And I find it interesting that Renee’s been so preoccupied with her mission, she hasn’t put two-and-two together.

Unfortunately for Renee and Helena, they’re both the self-sacrificing to save their friends types. Which means when both of them think the Vandal Savage will win, they’re willing to sacrifice their own lives. It doesn’t surprise me that Huntress is the one to knock out the Question first; Helena’s always been more impulsive. Helena’s tears as she drinks the bowl to start the magic to put Cain’s rage inside her was perfect.

I love the Huntress’ freak out moment where she thinks the mark’s on her face, and it’s just too perfect that the Question walks away without taking off her own mask. Of course, perfectly setting up the next story. I’ll be over here crying that Greg Rucka isn’t going to pen Renee’s next story.

I’ve wanted for a while to read O’Neil’s ’80s Question run, and this Detective Comics was beyond fabulous and made me want to read more O’Neil right now. He’s such a great writer. The story just flows and seems so easy, which is a hallmark of a finely crafted story. I loved this. Plus, Nguyen does some of my favorite current Gotham art. I’m so glad to read a story worthy of his art.

This really is a perfect example of a flashback story. Both the story and the art ease the transition. I also appreciated that it was a scary look at the Joker. The Joker is the most scary Gotham villain, and I feel like so many writers try too hard to make him scary and then he isn’t. But O’Neil gives us just enough Joker, on-and-off-panel to bring the horror of the Joker out. Even when Joker’s drawn in his old school clown way.

I also enjoyed what this story said about Dick. It shows what a good detective Dick has become under the tutelage of Bruce. Dick connects all the pieces many, many years later of where the medallion went. I liked how O’Neil brings the protector in so the flashback can be about Dick, not just Bruce. I love what experience has taught Dick. I love how bent he is for justice, even for a crime that happened a very long time ago.

The ending is very scary, and I won’t spoil it for those of you who haven’t read it. You should read it. It’s completely worth the money and tracking it down. Excellent issue.