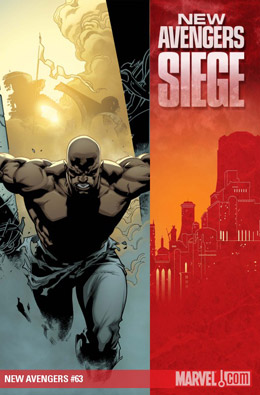 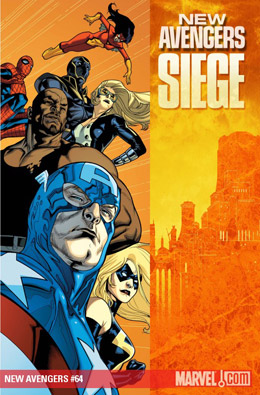 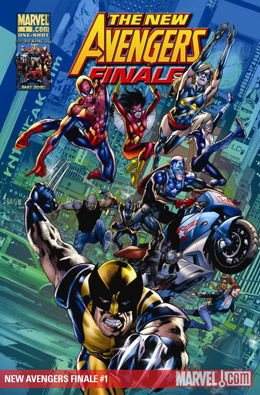 Sometimes Bendis just reminds me why I keep reading this comic, and this issue was right up front about that. You see, I get that Bendis is a comic book writer. I get that he likes these big crossover events with lots of fighting. But I don’t think that’s where he shines. I think it’s writing the smaller scenes; here it’s the relationships between Luke and Jessica and Bobbie and Clint.

I love the setup for Jessica taking up the Jewel mantel again. As long as she gets a new outfit. A good one, I think Stuart Immonen should help design it. Jessica and Luke have such a real relationship that really grounds this comic.

Despite not liking the action as much, I did find Venom trying to eat Luke rather funny.

Love Bobbi having to take off. I like Clint being the well-adjusted one in their relationship. Love that she blows off steam by taking down a D-list villain and doesn’t want hugs from Clint. This makes me so excited for McCann’s series about them. Obviously, she’s not dead under those rocks. (Thanks, Sentry, you dick.)

McKone’s art seems either hit or miss here. He’s definitely influence highly by Immonen. I really love both McKone’s Jessica and his Bobbi. But his Luke Cage seems off, and his Danielle and Taskmaster are little cheesy.

The first half of this comic was rather filler. I didn’t care that much about Norman and the Hood comparing power sizes. The get-out-of-jail-free part was pretty entertaining given I always like when things Fury created get used by the bad guys.

Of course, the Hood used the stones to superpower the super-creeps. Though the rainbow blasts were pretty ridiculous. Okay, they’d be more ridiculous if they weren’t fighting in Asgard.

I like the following up of Clint finding Bobbi and Parker finding Whitney. Bendis gives them both a very human reaction even in the middle of battle. The bigger picture stopped being what they worried about when they both worried about their significant others. Though I wish it wouldn’t have been both the women “trapped” and the men shouting for them.

I do appreciate the ending of the Siege from Parker’s point of view. Plus, it’s nice having Whitney being the strong one — even if she’s the villain. Though I do wonder what happened with his wife and children.

I wasn’t extremely enamored with this ending. Personally, I don’t understand why this title’s having an official reboot, except to get more #1 sales.

I’m rather disappointed at Madame Masque’s plotline. It became all about the Hood, about the man. Whitney doesn’t run to her father, Count Nefaria, for herself, but she runs to him for Parker. Her story is completely about the men in her life — her boyfriend and her father. Whitney loses any plotlines except them.

As always, Bendis writes a cute Jessica and Luke story bit. I’m glad to see Hitch and Immonen drawing Danielle as a little older. (I know time moves more slowly in the comic universe, but still…)

I felt like Bendis really moved Luke into the position as the leader of the New Avengers compared to Captain America or others in this comic. Though the leadership change seemed less organic than it should’ve.

I’m not quite sure how I feel about Steve Rogers taking Nick Fury’s old job. Especially since it’s actually Maria Hill’s job, who was completely portrayed as incompetent given under her Civil War and World War Hulk happened, the Skrulls invaded, and Norman Osborn took over. Steve’s one of my favorite comic book characters ever. However, Maria’s being sidelined for a man sits wrong with me.

Bendis’ dialog seemed to be in full-force here. The writing seemed less tired. Like he was excited to write comic books again. And the ending is one of the Heroic Age, with all the villains going to jail.

I’m not a big fan of splash pages to recount history. I find that a different artist every splash page is a little jarring. But I was glad to see a variety of Avengers’ teams represented. Though on that last splash page, everyone’s paired off and Carol and Jessica Drew totally look like girlfriends. (At least in my head they are.)