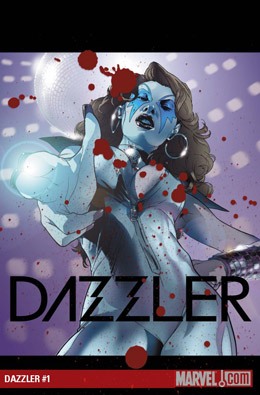 Here McCann takes on the task of reconciling who Dazzler is. Which is a rather large task even if the character’s only been around since the ’80s. Dazzler #1 becomes something of a quick reference to everything good — and arguably bad — about Alison Blaire.

Her troubled half-sister Lois London is pissed at her, and she leads Alison into a trap at Arcane’s Murderworld. Here Alison must put on the concert of her life or perhaps for her life, complete with ’80s disco get-up and roller-skates. She fights robots made to look like villains from her history like Doctor Doom and Galactus. (Though technically, she points out she was Galactus’ herald, not a hero, just in case hardcore Dazzler fans wanted to yell at McCann for continuity mistakes.)

After defeating the robots, Alison takes on the Klaw, a villain whose death got her a manslaughter trial. The Klaw is pure energy, and he has a big vendetta, because hey, Dazzler killed him by absorbing him. I think here the comic takes a nice look at how human even superhero rockstars can be. Alison has a lot more compassion than Lois gives her credit for.

Eventually, Alison must take down Lois. And then get her help. Because even her sister is not too far gone.

Unfortunately, the art is a bit schizophrenic here under both Andrasofszky’s and Perez’s pencils. Of course, piecing together Dazzler’s history is also rather schizophrenic, so maybe it fits. Just like those rollarskates.

I loved Alison standing up to Cyclops here. And I also loved her friendship with Psylocke. I probably missed some of the drama which Scott goes on about due to not reading Necrosha. I do love it when Scott says Alison can’t keep Lois on Utopia, and Alison starts listing off all the former X-Men villains which currently reside there. Or perhaps I just like when people backtalk Scott when he deserves it.

I like that Alison calls Barbara London, her and Lois’ mother. The conversation about how Barbara’s drug use caused problems for everyone, especially Lois, was very heartfelt. Every character said just what people do say without stepping into confessions which only happen in fiction land. I liked everyone owing up to their parts in the drama. (Well, except Lois, who’s currently in a psychic coma.)

Overall, “Tough Call” was a satisfying epilogue to the Dazzler one-shot.