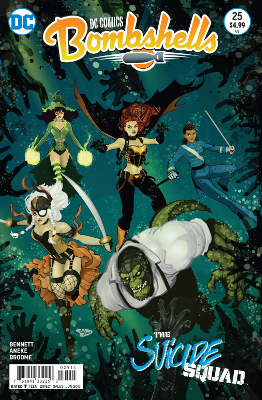 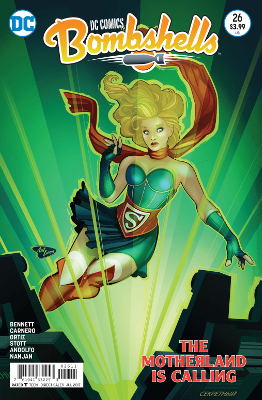 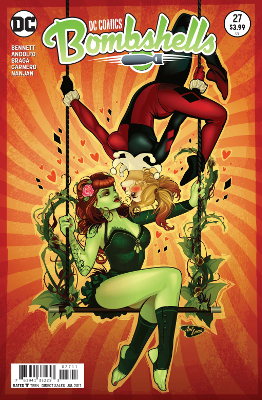 I hadn’t been reviewing these because I mostly thought this series would be a miniseries. A short run. I was unsure if I was going to like it. And then I read 24 regular issues and 1 annual. I figured now was a good time to pick it up in my reviewing cycles.

DC Comics Bombshells has the same strength and weakness: Bennett has an entire world to play with. She has scores of characters to bring up. But this is may mean you need to care about a lot of them. Thankfully, it seems that Bennett and I care about the same characters, so I have perhaps less of a problem than other readers might. This series is also about the women characters, which I know most all of them, and I’ve read other books about them. I cannot see myself caring this much if the book was populated with male characters.

The costumes in this series are ridiculous. They are more cheesecake-style, but not every single artist is a cheesecake artist. However, they still often feel less overtly sexual than the back-bendy, male-gazey art that plagues so many superhero books. This is probably because this book is not for men. This is not for the male gaze. This is for women, about women, and this title is as queer as hell. Bennett is a queer woman herself, and this is her universe to play with.

Most of the comic is set during WWII. The Nazis, of course, make an easy enemy. We’ve spent most of our time on the Western Front. There was a little foray into Northern Africa in Zambesi. I do wonder if we’ll see anything in the Pacific Theater.

In this particularly issue, Edward Nigma (Riddler) is trying to make a plea to the King Beneath the Black. (Was Bennett watching some Game of Thrones when she came up with this guy’s name?) He’s taking Tenebrus the Binder back to him as a bargaining chip. Tenebrus failed the Nazis. (The Bombshells defeated Tenebrus and the Joker’s Daughter in earlier issues. Tenebrus’ powers is to turn the dead into zombies, and said zombies were fighting for the Nazis.) With the reveal of Rhakontys the Bringer — who claims to bring plagues — I’m calling this as a Four Horsemen of the Apocalypse situation. Tenebrae was the Horseman of Death.

Vampire Babs was such a humor relief here. First with her inability to drink blood correctly, and then with her flirting with Luc. She’s very lucky that he seems perfectly okay with her being a vampire, and well, she’ll have to get used to him aging.

Frankie heading up the Suicide Squad is the best. She’s a nice Waller in training. (Because Waller must run the entire Bombshell operation.)

The flashback to Egypt got a little too much exposition for me. But I was so happy to see Nadimah and Qadir (from Batgirl of Burnside). I absolutely loved how Aneke designed Nadimah’s dress. In fact, I want one.

I do, however, wonder why if Faora Hu-Ul is working with the Soviets, then why didn’t she ever try to make friends with Supergirl, who was also in Russia, when the government was trying to turn Supergirl evil? Or did I miss that from earlier issues?

I just started talking about how great this series was, and then this issue wasn’t very good. There were a few flaws to it that I wonder if it had to do with editorial direction. My other big issue is the constantly changing art style. I suppose I should give this issue some credit in that the art changes are with each mini-story, so it bucks you, but doesn’t throw you out of the comic book.

The editorial direction I’m wondering about is that this issue serves as a recap as to where all our heroines are and what they are currently up to. This makes a good entry point for a new reader. However, for someone who’s read the entire series, it’s a clips issue. Only, I guess with comics we can be happy that there’s new art because we don’t have to pay actors or for special effects.

Clips issue with a song. I’m not a huge song fan in comic books. I have no sense of melody, and there’s no clues (that are obvious to me) that give lyrical rise to what my ear might hear. The song was a lot of exposition.

I do like that Harley and Ivy decided it was time for them to leave. Ivy’s glasses and dress were adorable. I want.

However, I don’t care much for Raven. Or for Constantine and Zatanna treating Raven like she’s their kid that they’re raising. Also, Constantine was completely drawn as a lesbian in so many scenes here, which is almost an in-joke.

This version of Kara hasn’t drawn me in. Steve Trevor is silly, and he looks about half his age here. I kind of hate all versions of Lex Luthor, except maybe in Superman: Red Son. But I assume Lex tries to hurt Kara with Kryptonite so she can take on Faora. It is silly that Kara hasn’t been able to fly since her sister’s death.

I do see a Pacific Theater, so I guess we will be going there.

At the end of the day, I just don’t find myself that invested in either Raven’s or Kara’s story in this book. I suppose, at least Raven’s, seems rather short, and like we might dive into a longer plot with Kara.

Raven’s retelling of her mother Azaria and her father’s first meeting was cute. Very Beauty and the Beast literally and Bennett put a lampshade on it.

I do like when even magic characters can’t really completely save the day.

Circuses and carnivals were used in this era as entertainment. But they were also host for outsiders or people who weren’t quite normal. I am surprised to see one traveling during WWII through Europe. Especially getting into winter. However, not surprised when Killer Frost (Ice Queen here) and Captain Cold are behind it. The comics always remind me how Wentworth Miller actually made Captain Cold a thousand percent cooler than he is in the comic books.

Lex Luthor is always kind of playing his own game. I am glad that Kara has some protection. Well, a protection that will also hurt her ability to function. And no one killed Steve thankfully.