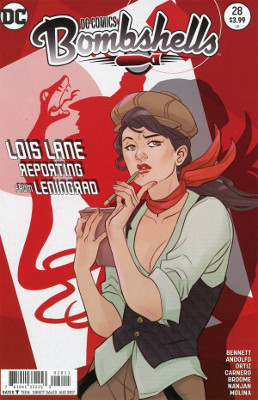 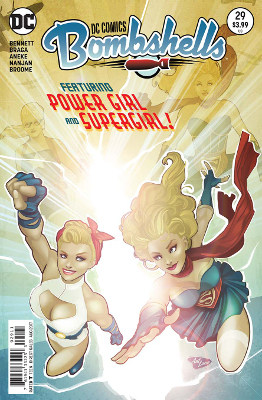 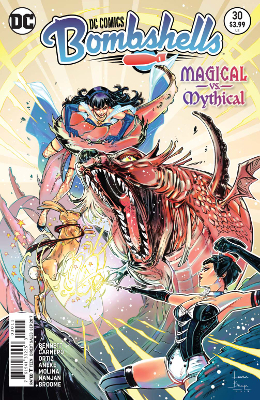 The opening part with the Reaper and Lois Lane crashing upon the circus and Raven’s crew was confusing. But then Lois quickly cleared it up with exposition about her circumstances and her life. (Especially if you don’t recall everything from early on. I was glad for a brief update.)

It is interesting as they dig deeper into the war how everyone is rather responsible for something. The food crisis in Leningrad is in part due to Nazi sanctions against the Russians. And many of the Bombshells contributed to that Russian isolation.

It was lovely to see Ivy take her own responsibility and discover how she can be productive and do something rather than kill with her anger. If only we were all on such a path. But it does say something about how we need to lift each other up when working together.

Does Killer Frost have mind powers? I don’t ever recall this.

I’m not in love with Power Girl’s design. It didn’t really feel of the era. It felt like the early 2000s.

Kara’s adoptive parents are the bomb. Seriously, if we ever wondered where Stargirl and Supergirl got it from, it’s those two. I loved the part about cosmonauts. Yes.

In this, Bombshells has been refreshing. It’s stayed when others have been cut.

Of course, Power Girl and now Kal-El become good, and they escape with Supergirl, Lois Lane, Reaper, and Steve Trevor. What an unlikely team. This is something Bennett does well. She brings characters together that we don’t always see interacting in very interesting and special ways.

I love that Supergirl spent time with Wonder Woman when in her grief. Diana would indeed be a companion you’d want. (And it also explains more of why Steve Trevor is hanging around with Kara.)

Though I do have to say that I expected them to stay a bit longer than two issues in Doctor Strange’s Soviet science lab.

While it’s great to see Kara work through her grief, Lois Lane’s own dealing with what happened to her family was ever stronger. We see Lois go from revenge to going higher. Of course, now she’ll also have this guy named Superman. (Maybe. You never know with Bennett.)

Superman and Power Girl as circus performers and Ivy’s garden in the winter are a little ridiculous. However, Bennett does know when you need to turn down the stakes and give your readers a slight break from the action. This is a good writing instinct.

You’d think that Ivy might be more upset about Superman completely bending down that apple tree. Or that she’d put him to work harvesting all the fruits and veggies before the winter hits.

Raven and Lois are rather adorable. However, I do wonder what the age gap between them is. Which could be more about Zatanna and Constantine calling Raven their child when Raven and Zatanna can’t be super far apart in age. (On the other hand, Constantine is probably like 300 years old.)

I kind of love Killer Frost. She’s definitely the best of the villains. Her flying jackalopes with fangs were pretty much the best ever. They are so freaking cute. I love them. And Constantine turning into one himself was hilarious.