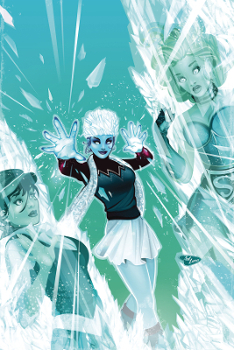 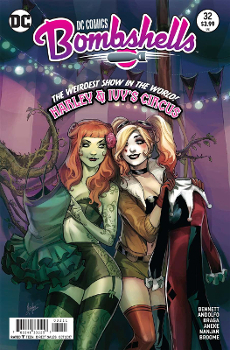 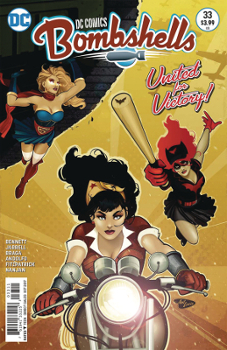 Bennett went there and made Supergirl have three moms. Like three biological moms. Yep, this is a world without men, or where they really are not needed. And I’m perfectly okay with that. (Though I’m rather surprised that the men who hate everything didn’t pick apart this storyline, even though they don’t read this book.)

I greatly appreciated seeing Killer Frost’s origin story. How her mother tried to save her, but ultimately, died, and how she’s unrepentant in using her ice powers for murder. Also, how the Joker’s Daughter came into her life, and how they found Zatanna and Raven. Sure, the Joker’s Daughter was incredibly manipulative to all the women, but Killer Frost didn’t necessarily get the abuse that Zatanna and Raven did. It’s easier to see why Killer Frost remained loyal to her.

Paula and Killer Frost having their confrontation was pretty great. Paula certainly thought she was pretty tough and evil.
It was also realistic that Frost started her power grab in a more conventional manner. Something we often forget that world leaders who go power mad, they start somewhere.

Faora Hu-ul is not my favorite. But that’s pretty consistently my opinion with Kryptonians (minus Kara and Karen). Their politics either go too far in comics or not far enough. In many ways, since we are dealing with WWII and ideas of eugenics and superior societies turned into real life horrors, Kryptonians and their arrogance are the perfect villains. Or the perfect example of how not be to.

Though Faora underestimated Kara’s family by a lot.

I actually read the last issue (the one after this one) first. When I got to the end, I was like “wait…” Dammit.
Comparing these last two issues, I’m a bigger fan of the penultimate issue. (I’ll discuss more in the following issue review about how the ending fell short for me.)

This issue mostly explores Raven and her father, Trigon. It shows how much she blames her father for her mother’s death.

One thing I do not like about this plot is how it makes Raven’s mother a saint. Trigon without her is a mess and goes into an evil feral state. Even if Trigon wasn’t a cursed prince who’d turn into a man with love, that doesn’t mean he couldn’t have some goodness in his soul and learn how to be kinder.

It’s also hard to have a very powerful character, like Raven, who is a kid. This is where the art sometimes fails us as Raven looks more adult than she is supposed to be. In fact, Zatanna appears more like her sister than her adoptive mother in age differences.

As Bombshells wraps up, it’s getting more obvious that people will have to die. People we will care about. (Though Bennett is somewhat precious about these characters.) It doesn’t surprise me to see Raven somewhat come to terms with her father, and then have Faora kill him immediately.

So Raven can turn into a beast.

Structurally, this is the only the second issue that the Bombshells directly confront Faora. It also fails to showcase what I liked about having a Kryptonian being our last standing major villain. For Faora being the last big bad they must fight, the fight sure went pretty quickly. It feels extra light since in the last issue, Faora was mostly just hanging out and taunting everyone.

The moment Faora turns herself into Doomsday, I figured that Bennett would kill of Supergirl. Since the most famous Doomsday plot is, of course, the one where Superman dies.

I get that Bennett is planning another series after this, and she probably doesn’t want to kill Kara. (Kara’s also an awesome character who’s gained a lot of popularity lately due to the Supergirl TV show.) Bennett also goes out of her way to make sure that Kara doesn’t become a killer. Instead, Kara’s adoptive parents and Stargirl’s biofather (who I’d largely forgotten about) die in order to kill Faora and take in the magic. Then Swamp Thing consumes her.

Which is my other issue with this book. All along, we’ve had powerful women who take care of themselves. But here, we have Raven being essentially too powerful to live, or what comics might call the Jean Gray as Phoenix problem. Raven will essentially explode as she has all the power of three extremely powerful women.

This ending again felt less in tune with the series’ messages about femme power and sacrifice. It is Reaper who kills Dr. Strange, not the cut-and-dry heroes. And Lois’ reaction seems a bit callous given that she was ready to kill to avenge her family.

Then we see Catwoman, Lex Luthor, and Amanda Waller talking about how they all manipulated the situation. Putting Lex into the mix again takes away from the femme power theme.

Obviously, in general, I really enjoyed this series. I plan to keep on reading it. But this as an ending was just disappointing in an otherwise uplifting message. If WWII is over, I wonder where Bennett has planned to take these characters as every single conflict post-WWII that the US inserted itself in is less good vs evil and more self interest imperialism.