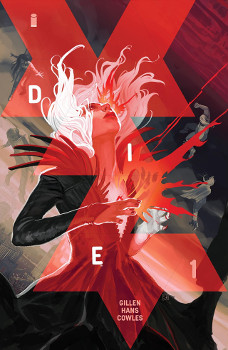 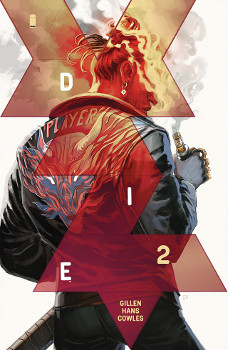 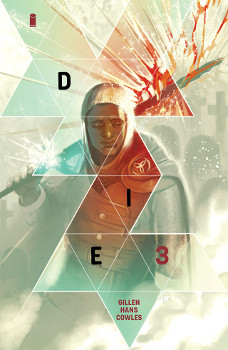 Gillen and Hans knock is out of the park with Die #1. I fell into this book, and I immediately wanted more. A lot of comic books can feel like someone’s D&D game come to the page, but Gillen manages to write a book about a D&D game turned heinous and it doesn’t feel like reading about his D&D game. I mean, we’ll see even more as we’re inside the game world in future issues.

Like Gillen writes in his closing letter, I too am surprised that no one ever made a horror movie or book called Die about a D&D game gone bad.

I’ve been wanting Hans to be on an ongoing book for a long while. She’s a great choice for a fantasy world, and some pain and horror. I cannot wait to see more of character designs as I already love what we have here.

With the previews I saw, I thought the entire story was going to be about the teenagers when they initially get sucked into the game. Not their distant future when they’ve been back — and never fully healed from their experiences as no one would ever believe them and there’s a spell where they cannot speak about it — and struggling for 25 years. Plus, with the exception of some characters in Phonogram, I haven’t really read a Gillen book with middle-aged adults. (Not that I don’t think we’ll have flashbacks to the original two years they spent in the game.)

Each of them have been marked by their time in the game. Even Chuck, who acts like he doesn’t care, wouldn’t have spent all his life making movies about the game if he didn’t leave with trauma or didn’t actually care.

I’m looking forward to how Dominic explores gender. How they all address being adults and having adult brains. Not to mention the reveal about Sol being alive and having replaced the Grandmaster, or the controller of the game world. I’m curious about Dominic and Sol’s dynamic, especially considering a special present seems like there could’ve been a ‘we’re queer, but we haven’t figured out it as we’re kids and it was 80s/90s.’

Also, did Angela lose her arm only when she actually came back? Since she has a robotic arm in the game world, she could’ve sacrificed it knowing that she might not have an arm if they ever escaped.

We still don’t know how they escaped the first time.

So many questions, which is exactly where I like to start a book.

Issue two gives us the setup of play. Gillen’s closing letter addresses the various character designs and the archetypes he’s playing with here. It might be considered a lot of spoilers, but it also might be helpful for those who don’t know D&D well or at all.

Chuck stabbing the orc was pretty great. Especially in how he discovered that she wasn’t actually into him. It was a nice bit of humor before the violence, and before the horror.

Sir Lane was pure horror, which is kind of the stuff that I expected in Die. (Also, like I mentioned around issue #1, cannot wait to learn more about Dominic/Ash and gender and sexuality.) I imagine we’ll be seeing more of the consequences of everything they did as teens. Everything they did when they assumed what they did had no real consequences to their lives — Angela didn’t lose her arm until they went back — or consequences they’d have to face. Or maybe this is why we all flee our hometowns.

Hans’ art is beautiful. I appreciate the edges of the world like the edges of die. And the elements of horror were just enough, like Matt’s tears.

The Tolkien was dripping off the page. Or more Tolkien with a confrontation of All Quiet on the Western Front. I am someone who has read both — oddly enough, in the same year I read The Hobbit, Lord of the Rings, and All Quiet on the Western Front — and perhaps when I read them, I did not make all the connections because I knew little of Tolkien’s life at the time. Perhaps, this is supposed to be a teenagers’ interpretation of the worlds and shallow understandings. Perhaps my own experience of reading these texts, at 19, would’ve also showed in my own shallow interpretations.

I’m not sure I would’ve gotten the flavor that this world is a D-20 literally without Gillen’s notes in the back. (Even with the drop-off clear in issue #2.) I love the extra layers, and as a writer, I love to read about his processes and what he thinks of his own works. However, stories should stand on their own. I do hope this 20-sided world will be more apparent as we start moving through different places. I love the idea of lesser Masters in each one.

This issue did feel grounded in place in the ways that other issues were not. It did not matter what place these six people original came from. It did not matter perhaps the lands in the previous issues, but here, place mattered a lot. I was greatly impressed with Hans’ art in this regard.

The steel dragon was amazing. The design perfect, and the level of horror moved up to the right touch. It was so much an unbeatable creature. I do wonder about Isabelle and those gods she must please regardless of if the magic worked or not.

No, Matt did not need Ash’s voice in order to cry. There was enough sorrow to scoop up, and too little hope. And they didn’t even know about how the message would get burned, or the eagles would not lift Samwise and Frodo to safety. These are all the bits that Tolkien puts into his stories to make them end with hope, with some message for the next generation to not go through the same war again. Perhaps it’s just the time we’re in that these messages seem so relevant again.