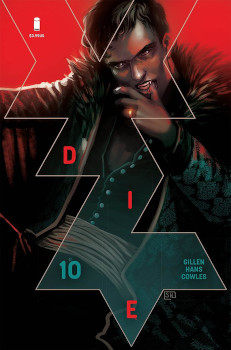 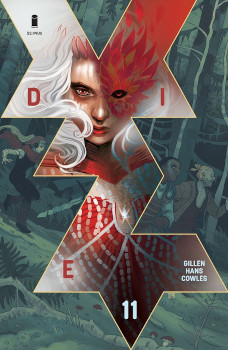 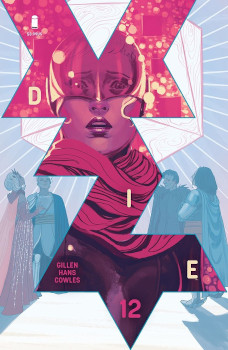 This is the issue where we see how morally corrupt and gray Ash can be. However, she seems like the type of person who can just shove her true feelings down and flow with the cruel. I think she’ll come to regret her choices, and I don’t just mean whenever Zamora gets off his leash.

I adored how Ash called out Zamora as a fantasy for teenage girls, and how he’s just a creepy older man. The healing here between Ash and Izzy was glorious. They never should’ve fought over Zamora, or blamed each other for their feelings. It was only Zamora — and maybe the Bröntes — to blame.

I’ll be curious to see how Ash’s relationship with Augustus plays out. He’s both her weakness and her pawn if she genuinely has all Dictators under her control.

Hans’ art of Ash in that red dress on her throne at the end was glorious. I loved everything about it so much.

Izzy is possibly regretting things. Just in time for everyone, but Sol, to be let out by Charlotte Brönte. Smart to keep Sol in, but I don’t think he’ll be caged forever. The crew isn’t going to let Ash run rampant. And even if the party split, it wasn’t like Chuck wouldn’t be back. They cannot avoid each other.

The breadcrumb at the start where they ask where the Fallen come from if Sol, Ash, and the rest were the first people to join the game…dang. The obvious answer is those who came after. And since we know time passed in the real world last time, that time will pass again and there would be family and friends searching for them. Not just hunting, but armed with clues about what they said to family and friends about the first time they came to Die.

And here, Molly (Angela’s daughter) is.

The emotional resonation of this issue worked so much as Ash morns her younger self. I felt it. Hans’ art also made Ash look much younger than she has in previous issues. I loved the part where she talks with Sol about Nirvana and how Sol took Kurt Cobain’s suicide. (Part of me was happy that maybe if Sol survives, he will have a new-to-him album to listen to.)

Ash doesn’t have friends, and it seems like perhaps Sol was the only one she had. And she loved him, while he created this game for her out of love. There’s something to Sol’s words that we do know yet. Perhaps, there was a budding romance neither of them could speak about.

It doesn’t surprise me that Chuck is dying. We have yet to learn Izzy’s secrets or adult motivations, which makes me sad.

This game is morphing. We know the secrets of the Fallen, but new people will change all the dynamics in more places than just the sewers. Charlotte Brönte saying she wasn’t going to get involved was brilliant.

When I read Die, I think about how I have a very lapsed RPG that I haven’t picked up. First, my room was a disaster with my partner saying he’d clean it. Then the pandemic happened, and since the game wasn’t active, it seemed odd to try to pick it up online again.

That said, I’ve found myself skipping the backmatter and wondering how much I like RPGs and the mechanics of them. I like story writing and stories featuring expansive worlds. I even liked cowriting fanfic, which RPG playing is very similar. But I cannot pin my blockage here.

This is not why I gave this issue 4 of 5 stars. Instead, that was because while we get reveals, perhaps we spend too much time with them. It reminded me of those Star Trek: The Next Generation episodes where we spend most of the time with the crew in a staff meeting. They can be useful, but also, they can be dry.

I love Hans’ dressing of Ash here. The art remains the most beautiful aspect of this work. Ash stood in stark contrast to Molly, and even a starker choice to have Angela — while washing her regular gear — stand in her white underthings, looking innocent and young as only a white blonde woman can perhaps in our culture, next to her zombified daughter.

I appreciate that Charlotte has more secrets. And that Izzy is mostly in the black with the gods. (Though can we please get more Izzy characterization, dying here. Same with Matt, though his fatherly moment with Angela was sweet here.)

The reveal about the soldiers that the Brönte children played with and created Angria with explains the timey-wimey perfectly. Also, an entirely appropriate place to make a Doctor Who reference.