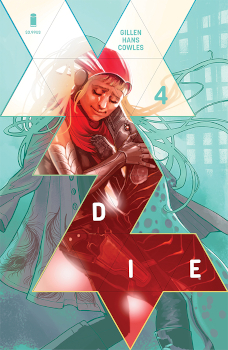 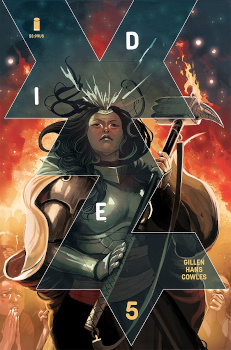 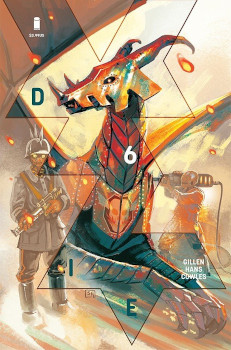 And all my back just fell out when Case appeared. OMG, do not kill the puppy! Angela’s hesitancy to reform her dog — since it must be kept alive with a magic coin — was too real. I wonder if it was based on one of her childhood pets.

Yes, to Ash talking more about her gender and why she makes the choices she does. I still don’t quite understand Ash’s powers exactly, and I feel that her gender presentation may have something to do with that. Or even her relationship with Sol.

The exploration into Isabelle’s powers was helpful for the clarification and some of the catches around using them. What a mighty nightmare to find your old high school diaries being used as some kind of religious text, but I suppose when you can channel the gods, that’s what you may find. After all, most holy books were not written by the gods themselves, but by those believed to speak directly for them.

Matt sharing his most inner fears and why this world wasn’t as scary as it was as a teenager was heartbreaking. He doesn’t need Ash to give him grief. Matt has plenty.

Oh, Ash, this may or may not work. But breaking the cycle is probably to their advantage. Maybe. This does make me wonder how many issues Gillen has roughly decided to do. Will we get an even 20? Or will there be more?

And now we got to the die part of Die. It’d felt like something was missing since the very beginning, and now we know what it is. There were more people trapped in the game than just Ash and friends, and when they died in-game, they became the Fallen. The Fallen who can revive themselves by killing this small crew.

Of course, Chuck doesn’t want to go home. He doesn’t need therapy or cheap thrills when he can smash things and be a famous god in this world. Isabelle is the only one who quickly understands the entire ethics of their situation, and she lobbies them to stay to put the Fallen to rest.

The question remains: how do you truly shut down this game? Yes, if they all agree to go home, they will go back. But the game of Die will live on, and people will continue to suffer.

I loved the flashback at the beginning, and how Ash understands the type of arrested development that Sol has lived in. While they all have their traumas from the first trip, they all also have tried to live other lives. Not Sol.

Ash’s use of her voice brings shame, and it’s interesting to see how she also views it as a kind of abuse. Forcing Chamberlain to betray his city is more than just that.

We see the foreshadowing for Isabelle refusing to go home in how she saves the people in Glass Town. She’s continuously attempting harm reduction but often puts her own well-being on the line.

Matt isn’t going to need to be prompted to be sad.

Hans’ art during the showdown between the crew and Sol was spectacular. The movements flowed through the page, and the fight beautifully and dramatically choreographed. It felt like an RPG at the same time. I loved the image of Ash killing Sol.

As the team splits — as Sol points out what you’re not supposed to do — the story wavers for me. This issue shows off Angela’s thief powers and what the Fair are about. Along with the gut-punch that is killing Case. This shouldn’t have been the last issue I read before going to sleep last night.

Movement is slow because of the sometimes repetitive nature of RPGs. They keep trying the same thing over and over when they refuse to make sacrifices. Ultimately, Angela must make that decision herself, and Case does seem to be her only friend here. She does not appear to be as close to her brother as when they were in the human world.

Perhaps I should’ve felt more affected about how Angela’s children said cruel things to her when they found out she’s bisexual, and her marriage with their father was ending due to her cheating on him with a woman. But, I don’t.

The mystery of how Sol created the game will no doubt be unraveled at some point later.

Hacking the dragon was a fun twist. Otherwise, I found this issue pretty tedious. Besides being sad about Case, and of course, curious about the character who refers to Ash as “mother” and doesn’t seem to be using that term as a rhetorical device.