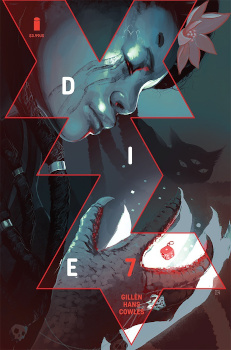 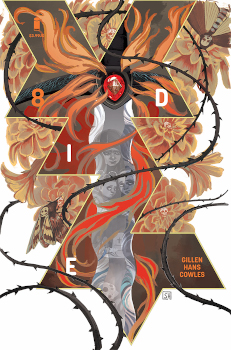 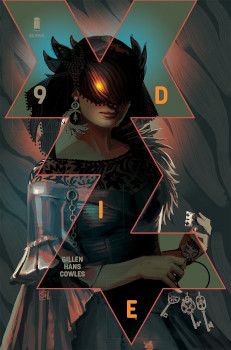 I guess one justification for shitty people being shitty people is that they aren’t sure what’s real and what’s not. Plus, Chuck is in literally another reality, which can affect him in the real world too (examples, Angela not having her arm and Sol being dead). I’m not saying Gillen didn’t pull off a great character study, but I am saying that I don’t find Chuck likable in any manner, nor worthy of sympathy.

The Elf Queen pointing out that he doesn’t even know her name or care to was brilliant.

Hans did a deft job in dealing with nudity, both the sex parts and the parts where Chuck pees blood after his battle with the Titan. (There are some of those real consequences of their battles.)

Isabelle learned just how far she’d take her powers, and how using them against her friends, directly in vengeance, isn’t her style. Plus, it put too many of Glass Town’s refugees at risk, which is her entire reason for existing. Here, it’s an easier lesson to learn because it’s Chuck, and because he knows he can somewhat make up for his actions — tossing her journal into pee and mocking her writing, in general — by killing the Titan (which twist, was not Whoa’s boon). They are unlikely allies.

While I find the grief knight power interesting, especially to see it laid out and Matt’s different choices, I don’t feel this issue gave me any new insights into who Matt is. He’s a father who’s upset about missing his family, especially his daughters, while trapped here. But Matt’s — like the rest of them — had a hard time fully living in the world after their initial trip to Die.

I don’t recall the sword talking directly to Matt in earlier issues (but I could’ve missed it, or thought it was another character, like Ash). The contrast with the joy knights and their motivations to fight, which essentially makes them monsters who enjoy killing, with Matt’s grief was a swift way to build comparisons. However, I do feel a tad influenced by the backmatter letter from Gillen in my appreciation of it.

While this clarified some of my questions about Augustus and Ash, I’m not sure we learned anything except how Ash played their initial run like nothing was real. Which means she did some terrible things, including abandoning her son, who sounds like perhaps he could be a powerful ally. Though that would mean Ash would have to deal with her feelings and make amends.

I guess I didn’t realize there were other dictators in this world, but that makes sense.

The paragons can’t stay away from each other. While I’m interested to learn what exactly is being built in Glass Town, I don’t know if this is a big enough hook. Also, last time Gillen wrote something where someone was building a machine, the machine was mostly a red herring for what was happening.

What? It was clear from the introduction of the Fallen and who they were (players who had died in the game) that Sol didn’t invent this game. He may have shaped some of the current incarnations and somehow made it happen for him and his friends, but also not. (Which has a deeper meaning in how the paragons cannot fully blame Sol for their situation and either trip to Die.) What I don’t understand — unless we wrap it up to being dumb teens and wanting adventures or this type of craving that Charlotte Brönte explains — is originally Sol was on their side, why didn’t they ever dig into these issues then?

Then there’s motherfucking Bröntes, and Gillen loves some historical, literary references if I learned nothing in The Wicked + the Divine. The Bröntes created Angria, but also before their deaths, they were only half in Angria, which they saw in daydreams and visualization writing. What Charlotte describes is what you can feel when you’re immersed in the storytelling as a writer — or frankly, even as a reader of a good story. Their father brings home these dolls, but also their already dead older sisters have been sucked into Angria beforehand.

Is this story then all about fate? About how your story is written beforehand, and you have to smash reality to break from it? Or just about how, when you’re young, you can take advantage of the unreality of life, and then you see the tangled threads later?

Ash calling herself the unreliable narrator is too on the nose. As a reader, I was already asking those questions, and we still lack characterization of the paragons, especially if we now cannot trust Ash. It is Ash who has described Matt and Isabelle in particular, which also has some weird racial dynamics only enhanced by Ash’s dictator powers.

Ash is going to loop Augustus into their world war. But who and what do they even go after?

Also, I assume Chuck is somewhere drunk in a corner.