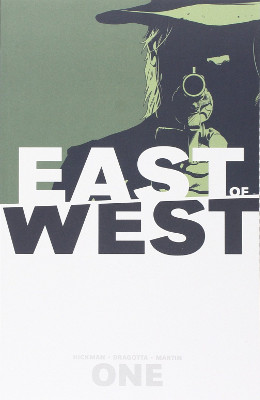 I grew up surrounded by Biblical stories of the apocalypse, which accounts for my distaste for them as an adult. I didn’t realize that would be what this book was about. I picked up as it was the book club selection and many people had recommended it since the series started. (It definitely has much acclamation.) I figured it was a story about some kind of dystopian future Western world in the US with a divide Union and at least some control or influence from China. I wasn’t wrong about that.

Many reviews found the plot confusing. Now reading it in a trade meant there was a new opener — three of the Horsemen of the Apocalypse being resurrected — which was not in the original issue one (and I’m unsure when it was printed). But perhaps again, I’ve read so many apocalyptic stories that the overall plot felt basic and familiar, such familiar mythos.

There was both a ton of magical and a ton of scientific woo-woo, which was brushed off to be used as ways to move the plot forward. Hickman certainly focused on building the world and explaining key components of it. At first, I was very much bothered by the fact that the Native Americans in the book only served as mystical warriors, but then the more I considered it, most characters in this book were shallow stereotypes and archetypes. This is not a character-driven story, and I’d hope in the continuing saga that Hickman takes the time to build in more characterization.

The character with the most background is, of course, Death, our star. Death is a white man — literally drawn in black and white — to drive symbol of him being Death home. But even there, we are told his background in exposition style. We don’t see him and Xiaolian falling in love — we are instead told they did and only catch a couple panel views of them trying to live a ‘normal’ life. There’s a lack of internal motivations and reasoning why after millennia that Death would change his tone. Seems like there had to be others in history who’d killed just as much as Xiaolian.

Most characters are shallow stereotypes at best, which range from boring Bel Solomon — our heart of gold white guy skeptic Texan cowboy ready to save the day — to Crow and Wolf — the Native American witches, who seemingly have powers that rival (or were perhaps granted by) Death. The narrative also uses racist slurs — by future Union soldiers and Andrew Archibald Chamberlain of the Black Tower (presumed Confederate) — and it’s used as a characterization shortcut.

Not to mention, the Anti-Christ being born of a union between Death and Xiaolain came across as both a stereotype — Xiaolain’s only purpose being to give birth — and the tired Biblical retellings. Hooking the Beast up to a machine to teach it to be terrible to humanity in a guarantee to fulfill its role to bring about the end of the world felt done.

Dragotta’s art was solid. But didn’t move me either way. The use of shadow was unique, and I can see why others really like this style.

I wanted something new or original from this book. Five issues didn’t give me enough newness, enough fresh ideas, or even enough twists of old mythos. I don’t plan on picking up volume two.