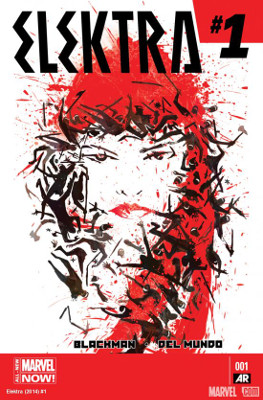 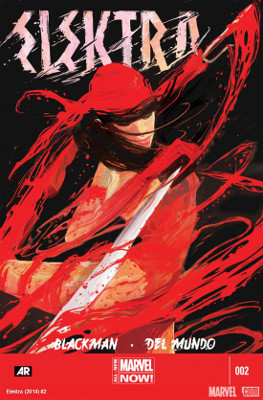 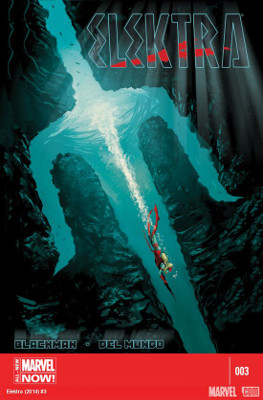 My first thought is that Marvel is very smart snatching up Blackman to write a book. Especially for a title featuring a female character, knowing that many people know his name from the Batwoman title.

My second thought is that Del Mundo’s art is gorgeous. I love the water-color aspects of it. The blood and ribbon flow through those first few pages is absolutely stunning. I may have a new favorite go-to book for the pretty. The faded feel of memories worked so well, and the 20s vibe when Elektra met with the Matchmaker just made me really happy.

Not sure about this Bloody Lips character. I’m afraid that he’s coming off as a stereotype of a native, savage man. Especially since he apparently eats people, or at least drinks their blood for power. I suppose we at least get some narrative from his point of view.

While I feel the book’s setting up for Bloody Lips and Elektra to face off, I’m thinking it’s more that she’s going to have to encounter Bullseye. Who stabbed and killed her.

Okay, perhaps not Bullseye — who Bloody Lips finishes off — but Lady Bullseye. Oh, Lady Bullseye, are you naked? Only half-dressed? What’s up with your costume? This is one area where Del Mundo needs some clarification to his watercolor-style.

I did not see the addition of Kento Roe, the Cape Crow’s son, coming. While I appreciate a fast-moving plot, it seems like Blackman might’ve waited at this another issue before meeting Kento. Except, of course, we’re saving Elektra’s encounter with Bloody Lips for a few more issues.

The random killing of Scalphunter by the kola bear thing was pretty funny. Of course, I still can’t believe it’s 2014, and our Native American character is still named Scalphunter. I really wanted him to talk some shit about how he’d renamed himself or something. Though, on the other hand, kudos to Blackman and Del Mundo for having no white men in this issue at all.

I’m curious to see where this book’s going, and since I’m pretty far behind in my reading, I have quite a few more issues already in my collection.

So I’m not sure if Blackman just killed Elektra and Bloody Lips together or if they’re seeing their victims from years past. I suppose this is the climatic launch into the second half of this arc, so we’ll figure it out.

I’m really digging Del Mundo’s art throughout this whole series. I can’t say that the style screams Elektra, but it really works. Especially in Cape Crow’s underwater hideout in Shicheng.

Though I’ll never understand why people don’t reconsider putting big glass rooms in underwater hideouts. Seems like a bad plan for floods. Though for the beauty I can understand, but a hideout usually (at least in comics) means you’re trying to hide from someone who’s after you and probably wants to kill you.

I’m not sure how I feel about Elektra’s mother ghost blaming her for her death. Well, we’ll see how this pans out. Dead mothers in comic books. Sheesh.