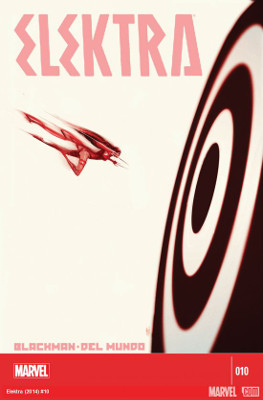 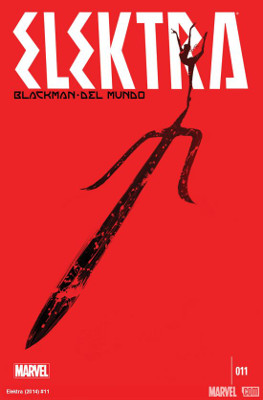 I cannot tell if the point of this story is to: 1) have Elektra face one of her biggest fears (death via Bullseye) or 2) bring Bullseye back to life in the greater MCU. I’m hoping for the first option, but somehow I’m not so sure.

Of course, they were being led to a trap. Of course, Kampling Monyet, the head of the assassin’s guild, is both a child and a telepath. (Those monkeys with doll mask faces were super creepy. Thanks for those nightmares.)

I’m unsure how Elektra could’ve gone through Bullseye’s mind and not discovered that his body was healed. Or not known anything about those waters. Or thought about it at all. Like Bullseye is not known for his ability to lie.

Pretty much called it from the start of Bullseye taking out Cape Crow and Kento. I do love how Del Mundo draw’s Cape Crow in these scene, how old and weak his body is. I’m really crossing my fingers here that Elektra kills Bullseye and then she kills the creepy kid and all her creepy monkeys.

This was a great ending to the book. Elektra continued on her mission, but she changed the game in order to do so in better manner. I also love when an author takes the time to show how fighting causes real body damage, and the contrasting of Elektra with her geriatric self worked perfectly. Same with Elektra’s uncomfort at the metal in her skull.

Of course, Bullseye isn’t dead. You’d think that Inochi would be less inclined to help him after Shibou’s death. Of course, they probably will team up together to take down Elektra. I did enjoy Bullseye’s line about them needing to get away before Elektra realized she’s an anti-hero and opted to kill them instead of saving Kampling from her death by card trick.

Del Mundo’s art continues to be absolutely gorgeous and working so well with fight scenes. All that pretty blood. I hope I get to read another book with his art soon.

Centering Elektra on her continuing fight to live and thrive made this a lovely journey.