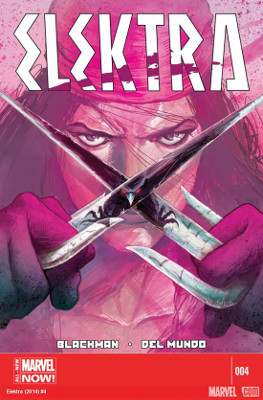 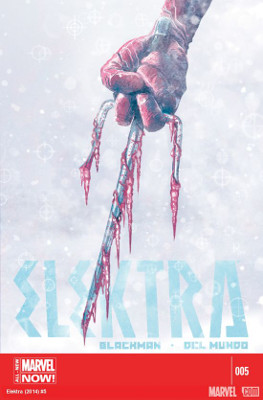 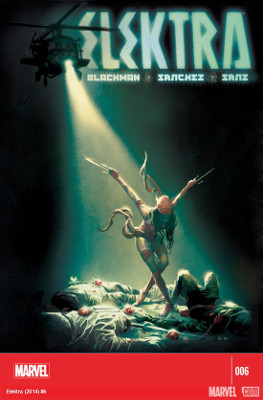 I’m a bit confused about this supposed mindcontrol that Elektra seems to think Bloody Lips has. I mean, he also saw the hallucination about his dead wife Coreen. Oh, and super fun that his resolve was that he was always meant to kill his family, no matter what.

I do like that Elektra resolved that it wasn’t her mother. Nor would her mother give her the type of advice that this hallucination did. It was nice to see her saving Kento.

Also Elektra’s swimsuit costume was actually justified in that she used it as a swimsuit. However, it won’t be very warm in the Arctic.

I guess that Cape Crow isn’t as dead as everyone thought he was. Will they team up to take down Bloody Lips? Has Lady Bullseye just died in that plane crash? Tied up while standing is not really the preferred way to survive a plane crash.

This issue seemed really anti-climatic. Bloody Lips being defeated by Elektra’s pain. (Though wow, did Blackman do a fabulous job at turning a trope most associated with male characters — deep pain so deep that other characters just don’t understand — and using it with Elektra.) Del Mundo’s art around Bloody Lips confronting Elektra’s life was both ghoulish and beautiful.

I’m glad to see I was correct that it was not Bloody Lips who was influencing Elektra’s mind. But instead it was Kento and then his father. Which makes more sense why Kento was hurt so badly underwater even though he had the helmet with oxygen.

Interesting to see Elektra play bodyguard to Kento and Cape Crow as they try to find some safety. Especially when she could leave to pursue her own dreams beyond being an assassin. Which is something she arguably was trained to do instead of wanting to be.

I had a lot of trouble understanding just how Elektra and Lady Bullseye did not freeze in the Arctic. Especially Elektra who went for a little swim. Granted, they didn’t really show the hours that it would take to fly from one location to the next.

I am hoping for more Matchmaker in future issues.

And then Lady Bullseye just killed Matchmaker. Or I’m going to assume that she won’t live through a sword through her gut. This makes me sad, especially since Matchmaker was witty and held her own pretty well.

I am interested to see what happens to Lady Bullseye. Especially since it seems that she’ll have some new powers (though they might just be regeneration). I think it’s unlikely she’ll die from this experiment. But it certainly makes things more dramatic.

I’m surprised that Elektra doesn’t have any safe houses herself. Seems like the Assassin’s Guild has found all of Cape Crow’s. Plus, the Marvel U is bigger than just Earth and Kento’s likely right that they’ll have to do something besides just kill all the assassins and their leaders. Also seems like eventually the cost of sending assassins and backing them up would outweigh any wrath the leaders felt about Cape Crow. Cost and benefits and all that. Especially since Cape Crow retired.