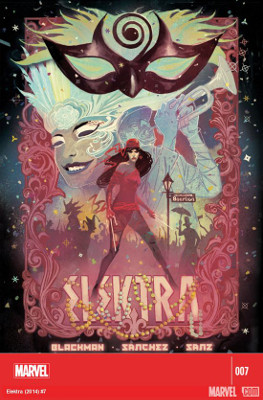 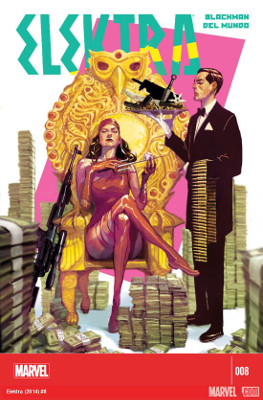 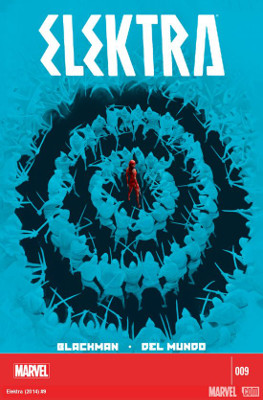 I’m so missing Del Mundo’s art. It’s the missing thing to make this book that much better. Sanchez’s art on this second issue of his just isn’t working. I don’t get what Elektra’s face and body pose (weird back bend) is saying while they’re all standing over Matchmaker’s grave.

I was wrong that Lady Bullseye wasn’t going to die. She’s pretty dead again. I guess those nanites don’t solve everything. Also, I don’t even know why the Assassin’s Guild thought Elektra would ever agree to be injected with that stuff after she saw what it did to everyone else.

Don’t know how I feel about this recent pattern of heroes just wanting to go on their own to avoid getting anyone they slightly care about hurt/killed. (Or if I buy that Elektra truly cares that much about Cape Crow and Kento. Or that I get how they still won’t be hunted as Elektra goes on her own mission, especially since the Guild already knows where that hideout is.) This book is trying my patience every time I think too much about it.

Glad to see that Del Mundo’s is back on the art. I do love the swirling style that he has.

That said, the plot seems to drop off a bit here. We have Elektra going to find Bullseye, who’s in some secret S.H.I.E.L.D. mid-air healing tub or something. Maria seems a little wishy-washy about what she’s going to do about Elektra. I have a feeling this is because the title’s called Elektra, and it makes a poor story (usually) if your main character is behind bars when they’re supposed to be on another mission.

In other news, I thought that Elektra already took out the Hand once. You know, after she led it for a while. I get that the Hand, like Hydra or A.I.M., will always come back… I did dig their dragon, which is well-suited to Del Mundo’s art.

If anything, Del Mundo’s art pushes this book up to five stars for this issue. I loved the scene post-dragon heart eating where Elektra walks through her heartbreak with Daredevil. That was one of the most beautiful scenes in comic books that I’ve seen in a long time. Incredible use of white space. Del Mundo’s style there stretched beyond what the book normally looks like, and oh, do I want more of it.

Loved the contrast of Jennifer Kale’s facial wounds as part of her bargain for resurrection as physical pain to Elektra’s bargain of emotional pain. I don’t know why Maria thought she’d be able to follow Elektra on her mystical journey when Maria just stood there doing nothing during the spell. Maria’s not exactly new to the Marvel U.

Adored Elektra’s bargain with the dragon. She lets it go to freedom, and it helps her take out the Hand. Of course, the brothers, Shibou and Inochi, have already achieved their goal: which was to heal Bullseye. I guess we know who Elektra will be killing next.

I’m surprised Kento and Cape Crow have survived that long without Elektra there to protect them.

Follow Elektra and her battle with the Assassin’s Guild in Elektra Volume 2: Reverence