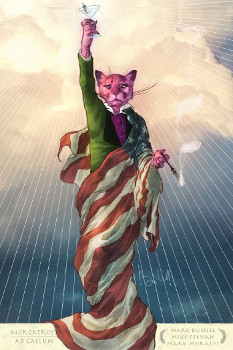 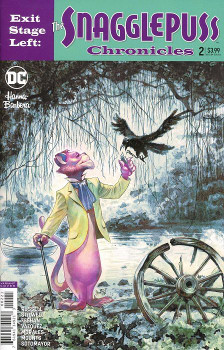 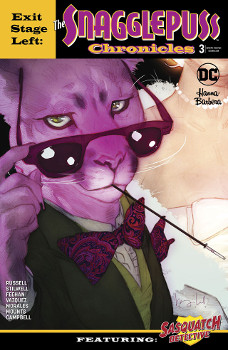 Processing my feelings about this.

Snagglepuss may be the most relevant to 2018 fiction I’ve read (so far). I mean, it’s still January, but damn, S.P.

Snagglepuss is set in 1953, when the Rosenbergs were executed by the House Un-American Activities Committee. S.P. is a famous playwright, ala Tennessee Williams, right down to the being a gay Southern man. Err…hot pink lion man.

What I loved about Russell’s writing is that he doesn’t hold our hand, and he cleverly explains the world without having excessive exposition scenes. (Or really, any exposition scenes at all.) From S.P. and his world to the political situation to the famous authors, Russell just drops it in, and I freaking love it.

S.P.’s boyfriend Pablo’s story about fleeing from Cuba after the abuse his suffered and how his boyfriend was killed, and his very real worries that things in the United States could turn out just as bad for them were haunting.

Everything about Snagglepuss is just hitting me right where I live.

I expected to be knocked a bit out of the seriousness by the whole pink lion and blue dogs thing. However, the only part that got me a few times was how none of the male animals wore pants. It was a little awkward. (Though they are drawn smooth as barbies down there.)

Just realized that I’m a queer politics nerd who majored in English and loves cats. Am I Snagglepuss‘ direct audience?

Snagglepuss may be one the greatest comic book currently being written.

There’s a scene early on that has me thinking for days:

Augie Doggie: “I wanted to thank you for giving me a change, Mr. Puss. I don’t think I could have gotten into theater without it.”

S.P.: “Well, what’s the point of giving a break to someone who doesn’t need it?”

As someone with power and privilege — that the House Un-American Activities Committee is working to undermine — S.P. tries to lift others up. When he needs stage help, he finds someone who wants the work and knows enough to excel. I think about this scene and how it relates to my own work as a conference organizer. How the best days are around elevating someone’s work and story, and giving someone that break and the literal stage that they may need. This is real work.

Not sure if S.P. was touring a mental hospital or old person’s home. But I also see this as a way he’s perhaps connected with queer folks who’ve been locked up. Maybe?

Wow, Huckleberry Hound is one depressed man. What a metaphor for the lonely and desperate life of being in the closet and then being outed. I don’t know how I feel about S.P. using Huckleberry’s pain to elevate his actor and for play material. But I guess that is also how we writers work. And Huckleberry himself is an author.

That scene where Huckleberry approaches the guy on the pier for sex was just… He’s lucky he only got punched.

Loved the homage to Edward Hopper’s Nighthawks. It’s so beautiful. Lilly looks perfectly distraught and perfectly from her era and culture. Feehan is amazingly talented.

I’m onboard with this.

In the world of 2018 and social media, it’s so weird to reflect on how Huckleberry’s wife found out he was gay, kicked him out, and banned him from his son. This would be a huge scandal. Due to the era, Huckleberry would likely lose his publisher, and he’d likely be uninvited from The Mo Franklin Show. But because of the era, his life is incredibly fragmented. I’m sure his wife could go to a newspaper, but it would be a lot more trouble than like posting on social media.

I loved Snagglepuss just hanging out by his pool. The little changing tents are a cute detail. Loved him getting so angry at the phone interrupting him. Again, another sign of the era.

Huckleberry experiencing his first gay bar, the Stonewall (of course), was so heartwarming. I can remember that feeling of being around my people. Hell, I still have it. While I like this scene, it did lack women. We know the historical Stonewall bar was populated by people of all backgrounds, races, and all flavors of the queer community.

S.P. fucked it up with his boyfriend. But it seems like that’s not permanent. Or perhaps S.P. looks at it more lightly than Pablo feels.

I’m not sure what I think of S.P.’s interactions with Marilyn Monroe and the parts about her relationship (and her cheating on) Joe DiMaggio. It did become very clear that Huckleberry’s pain isn’t the only source of stories for S.P. And it’s the reason that he visits the old folks’ home too. I did like that he thanked Marilyn for showing him the human side of her that most people don’t get to see.

I found S.P.’s monologue about how plays are about people’s inner lives, and how TV is about how we want to be, to be very thoughtful. I feel like our golden era of TV right now has swapped this. Most folks don’t go to theater anymore. We’ll always have books. But TV has grabbed this quite a bit. We now have room for the quieter, inner drama.

If nothing else, this book makes me think a lot.