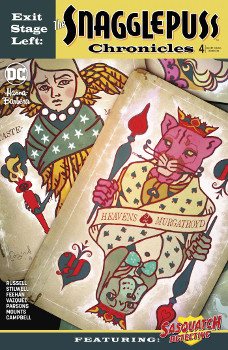 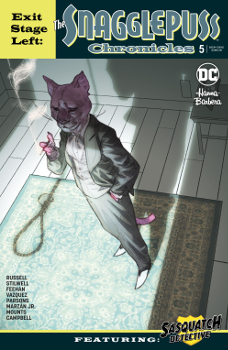 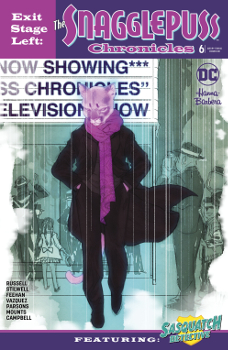 Gigi Allen going to Doom Town to see a nuke go off (from a “safe” distance) and lecturing school children was pretty heavy-handed. But it turns out, I didn’t mind it. It clearly sets up her zero game worldview, and how she sees things only in black and white.

Compared to Snagglepuss’ world, which is fraught with shades of gray, pink, and blue.

My heart broke for Huckleberry. He was so happy with McGraw. Though McGraw was deluding himself — in all the ways that being in the closet and thinking you can live separate lives does — in that his job as a cop would never take him into a place where he’d have to choose.

Though McGraw, not wrong about the Stonewall not being the only bar with mob connections. Many, many bars in New York City were mob-run and owned at this point in history.

It was so ugly to see Huckleberry beaten and then tossed into the police wagon by McGraw.

S.P. may be having his own problems with his “wife” and his boyfriend. However, he did dodge a bullet from Gigi meant for him. Even if the House of UnAmerican Activities got everyone and made Ronald Regan a politician.

What Huckleberry says at the end is beyond poignant and signals more to why I believe Snagglepuss to be one of the best books of 2018:

“A man cannot pretend forever. A man can no more hide his nature than outrun his shadow. The truth is they will always find us, S.P. Whatever we do, wherever we hide, they’ll find us. We’re fools if we think otherwise. Our only choice in this life is to change the world or be destroyed by it. And God help me, S.P., I’m not sure which one I prefer.”

Homophobia kills. S.P. and I now have something in common; it killed our childhood best friends. Now I’m going to go cry over a comic book about a pink lion, if you’ll excuse me.

I will miss this book very, very much. No book — especially one from the big two — has hit my many feelings about living right now than Exit Stage Left: The Snagglepuss Chronicles. I’ve read a lot of great books this year, so far, but this is perhaps the best. It was brilliant and unexpected. It was poignant. It reminded me that we aren’t going anywhere, and we have to be brave

S.P. is both a hero and someone who struggles, while remaining unabashedly true to himself.

What happened to S.P. was completely in line with what did actually happen to those who came before the House of UnAmerican Activities. Which was they were blacklisted and they were banned from working in entertainment. Sometimes, they got gigs under assumed names, but it took decades for them to come back to film and stage, if ever. It makes sense that S.P. finds himself working in cartoons and with TV where people cared less as TV was considered “uncultured.”

I’m not sure why I didn’t put two-and-two together about who Quick Draw McGraw was. He learned one of the hardest lessons you have to learn as a minority, you aren’t going to be exception when push comes to shove just because the bigots know you. They will still vote against your interests. They will still lock you up. You will still lose your job and livelihood.

The one flaw I found in this book was around the wrap up of America’s nuclear fascination and Soviets vs United States. Nixon wasn’t a good man, and even if yes, what we’re saying here is that we’re closer to the same than different, Nixon is a step too far.

That said, every bit of the rest of this book I loved, and it outweighed my dislike of humanizing Nixon and Khrushchev.

I almost started crying (again) when it was revealed where “exit stage left” came from in the narrative. I’d been wondering why this book had such a long title.

I didn’t figure out that the old man was S.P.’s father until the reveal after his death. One wonders why S.P. continued to visit him all those years, or if there was ever a glimpse of recognition. Did S.P. find his solace in their last conversation where he admitted there was nothing he could’ve ever done or said to make S.P. not be gay? (Though I now have a zillion more questions about how genetics work in this world.)

In some ways, all of them end up with very lonely lives. Huckleberry Jr. finds his way to showbiz and out of the world of his mother. But Quick Draw and S.P. are seemingly without love. They have lost the power they started the series with. For S.P., he may have lost a lot of money too.

Does this end with the loneliness of being gay in a world where you’re not accepted? Do young queer audiences want more? Have we moved on from the isolation? Sure, you can argue that in some cases they have each other. It’s not like S.P. doesn’t know other queer people. Hell, he works with Quick Draw every day.

Though I think it’s like the bartender said, people needed to know they weren’t alone, that being queer and living a life was possible, even if S.P.’s life fell apart and Huck died. “You didn’t fight the system to win, S.P. You fought to show it can be done.” That is why we come out of the closet. That’s why we risk so much to be true to ourselves. It’s possible. We’re here; we’re queer; and we’re not simply going away.