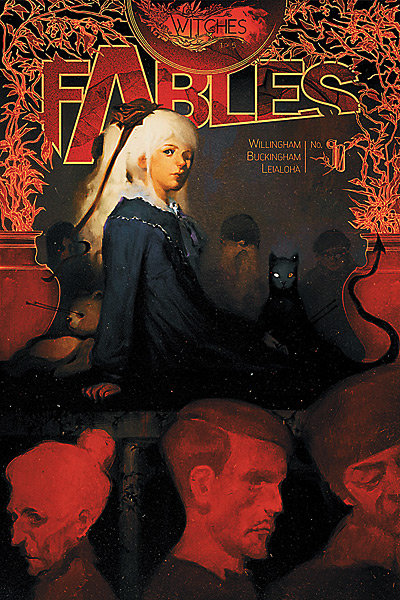 Part of it was that I’m not very entranced with Bufkin’s story. While I totally understand how Willingham likes to tell the stories where the underdog wins, Bufkin verses Baba Yaga was not a story I wanted told. It was also a story that I found slightly unbelievable. Especially since Frau Totenkinder could barely take down Baba Yaga. But the silly flying monkey could! With the naked Barelycorn Brides! It bothered me and my sensibilities.

I did rather enjoy Ozma and Frau Totenkinder getting into it. Ozma is certainly no little girl, as much as Frau Totenkinder is not someone’s grandma. Even if she did knit an outfit for Beauty and Beast’s monstrosity of a child. (Total red herring. I think their kid is going to be rather normal looking.) I’m kind of okay with Frau Totenkinder turning back into a young woman. Yes, it’s sad in that older women are not often portrayed in any sort of medium, but I do think that her transformation fits well with her storyline. Especially if she feels she must go on the front lines of the battle against the Dark Man.

I really enjoyed the introduction of Maddy, the magical shape-shifting cat. But of course, put a magical black cat in a story and I’m probably bound to like it.

The story of the Boxers and Dunster Happ rather bored me as well. I hope that he helps Totenkinder without stealing the story.

I am so tired of Rose Red being depressed. Seriously, how does Snow White not go and drag her sister out of bed and yell at her?

Geppetto is just as ridiculous as always. And up to no good. I get why he got pardoned, but I have a feeling his story is going to end up a little like Goldilocks’ did. Oh, I hated how this book ended on the cliff-hanger with the Blue Fairy reappearing and swearing to kill Geppetto for what he did to her. I actually wanted to see more of what happened. Good thing the next trade is out in March.

The whole baseball story just threw me off. In fact, I put the book aside for a few days in disgust. But in the end, it turned out to be more than just a ‘hey, Willingham likes baseball so he wrote about the Fables playing baseball’ story. I liked how it showcased that everything in the Homelands isn’t peachy keen, but people are trying. I liked the Catch 22 moral dilemma. I’m really glad that Flycatcher and Ride finally hooked up. It was sweet.