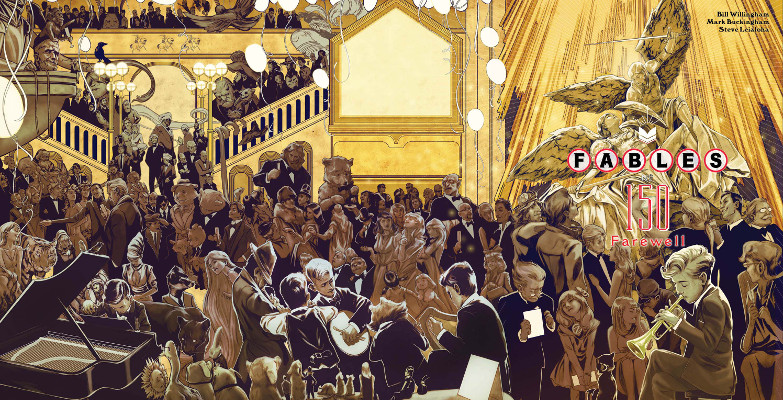 The part I found the most anticlimactic was no resolution between Snow and Bigby. Just Connor being scary and Bigby realizing his boy has grown up and all the better. WTF. Snow and Bigby don’t even have a talk, not even to list the others which Bigby killed in his feral state. If Willingham wants us to be invested in their relationship, they actually need to talk about what’s happening to them. Wow. Imagine that. Of course, they never did really talk about how they hooked up and ended up with seven cubs when memory problems happened.

Boy Blue “saving” Rose Red from fighting her sister and giving back the final shard of Bigby was a yawner. Because there’s no way she’d apply that logic on her own. That Snow had boys and had children when Rose was still alive.

I’m glad they killed Brandish. No one is sad about that. However, Grimble and Clara hooking up at the end, WTF.

The ending vignettes seemed to drag on and on. Many featured characters that were random side ones which no one cared about. Plus, who cares if Pinocchio and Geppetto continue to be terrible people only now in the magical Mundy world. I already read how many volumes of them and their terribleness.

Lumi and Winter hooking up seems to not understand how being queer works. Also too late, too little, Willingham.

Blossom seemed like a waste. I would’ve loved to see her still pudgy.

Ambrose is ever more a standin for Willingham. Only one who people actually like a lot with a big family and friends with Santa. Not to mention, Lake as his hot wife. Their fate gifts for their children seemed a bit callous.

And glad that we never got to really see Rose Red and Snow White make up. Good job!

Read the ending of Fables in Vol. 22: Farewell.