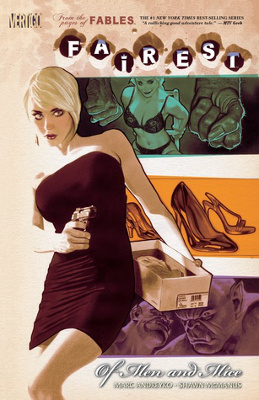 This book kind of passed the Fairest test, which is the requirement that the tales be about women. Cinderella and Snow White were at the heart of the tale, though Marcel, Ramayan, Crispin, and three blind mice, along with Fairy Godmother and Leigh factor largely into the story. This book also hinges a bit on the other Fables tales, particularly the one where they discover that Fairy Godmother has gone bad/has alzheimer’s and the last Fables trade where one of the young girls discovers a bunch of evil rats.

I’d also be remiss if I didn’t mention how excited I got that Cinderella was going to India, and there wasn’t any culture appropriation and we even had Indian Fables, including the fabulous Ramayan, join in. However, there was a cover where Cinderella was portrayed as a Hindu goddess with multiple arms and holding her shoes. Fail.

There was, however, a big win for diversity. Andreyko made Crispin blatantly gay and made the Huntsman his partner. Yay! How many issues of any Fables story did it take before having two gay characters?! Seriously. And it doesn’t go without notice that it was Andreyko, a gay man himself, who made it happen.

I really enjoyed the team up of Cinderella and Dickory together. Seemed like both were greatly underestimated by any of the foes that they went up against. Thought it was hilarious that Fairy Godmother’s guards believed she was meditating. Also that Cinderella and Dickory found her smoking pot in an Amsterdam cafe.

A bit problematic that Fairy Godmother’s dementia was shot away with a bullet. I liked that Snow pointed out how popular Cinderella was as a musical, and that it was at the height of the season.

The whole story about Marcel being the errant rat who stayed human after Fairy Godmother’s spell and loved all the women he slept with. Who then gave birth to his children: human, rat/human hybrid, or rats. Gross. Seriously, glad that the dude stopped on his own and Cinderella gave him shit about putting them up for adoption, taking them to the circus, or letting them go in the wild.

I don’t know why anyone hasn’t suspected Leigh yet. Seriously. (Andreyko also played Brandish here like he’d actually repented, when that doesn’t seem to be the case in the main title.)

I could’ve gone with a story about Ramayan and Cinderella having more hero and spy sexy fun times.

Read the tale yourself and buy Fairest Vol. 4: Cinderella – Of Men and Mice