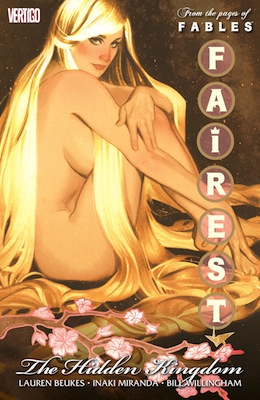 Okay, but why the three stars? Why again must these books have so much promise and so much joy to only be ripped away?

So the ending, when Joel Crow gave Rapunzel the potion from Frau Totenkinder to make her forget everything. Which means, once again, a woman’s agency has been taken away by mind-wiping her. I want Rapunzel to dive into whatever dark is going on about her children. I want her to be on the trail. I want Beukes to write a follow-up of what happens, and I want Joel to accompany her. I get that it’s ultimately Frau Totenkinder fucking with Rapunzel again, but Joel, who claims to love her, does the deed. He gives her drink. In which, it will probably also make Rapunzel forget about their entire trip to Japan and thus, their new relationship and cause pain for him. But not the same pain at being mind wiped against your will!

(I also don’t entirely blame Beukes for this as if Willingham wants to save the rest of the plot for another time, I can see it being an editorial decision.)

During my reading of Fairest and also that of Katana and my viewing of The Wolverine, I realized how little I actually know about Japanese culture. I mean, sure I know all the major stereotypes that are blatantly offensive and a few other things like how chopsticks are for eating, not putting in your hair. (Yay for Miranda keeping them out of hair!) I’ve been to Sakura-Con in Seattle a few times, and I took an Asian America literature class in college, which focused on a lot of different cultures and only brushed the surface. So when I consume media about Japan that inevitable pulls in samurais, assassins, Yakuza, and lots of tea, I always raise my eyebrow and wonder if the story can make its point without them.

On that note, I found Fairest pretty refreshing, even if Tomoko’s army is referred to as the Yakuza and we see her taking down other mob leaders. I was okay with the tea, inevitable drunken karaoke, and the old woman who burns Jack’s shirt while playing Pachinko. And since the Fables are “super powered,” I could handle Mayumi and her swords as what the rest of them attacked with was quite varied. But I’m also aware that I’m not one to make a final call on this, and I’m curious to hear other people’s thoughts.

I thought Beukes did a great job at dealing with putting Jack in the story, she got rid of him early on and only made it necessary to show him to look into what Tomoko planned against Katagiri and his rebels. It was kind of fun to have Jack as a somewhat damsel in distress.

I also appreciated that Joel was clearly tagging along and didn’t really have a clue. (Which, as he pointed out, was ultimately unfair of Rapunzel to hide so much from him, but typically, you see it the other way around.) He didn’t save her through his love, and Rapunzel mostly slept with him to make her hair grow a lot (and to have fun). Though I’m not surprised to see that Rapunzel would have to love a hair dresser.

I loved Rapunzel’s punk-styled hair after she and Joel escape Tomoko’s tower. I also adored them riding Neko, who turns into a giant lucky cat. Plus, you know, I love cats. Also, who doesn’t love a panda with a gun, even if pandas aren’t Japanese.

I also appreciated that while Rapunzel helped them reclaim the Hidden Kingdom in the Homelands, it wasn’t a “white girl saves them” plot. No, Rapunzel’s bezoars where indeed her own to clean up, and her own thoughtlessness and revenge-driven mind was what actually took down Ryogan. It was actually both Tomoko and Katagiri who kept the Japanese Fables safe, and it’s them who will be working together to restore the Hidden Kingdom.

The bezoar story was desperate and gross and perhaps the closest to a real horror story that Fables has had. And it was with a princess. I don’t even think that Frau Totenkinder’s stories compare.

Reynard’s story with Princess Alder just seemed a bit tacked on. I don’t quite understand what Willingham’s fascination with Geppetto as evil is. And I don’t find poo jokes all that funny or why Reynard, as a fox, couldn’t have brought Alder the dead body of the rabbit he ate. I am, however, happy to see Kitson get work as he’s a great artist.

Get to know Rapunzel and her hair and buy Fairest Vol. 2: Hidden Kingdom