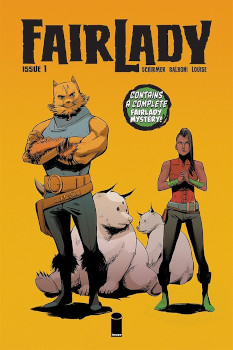 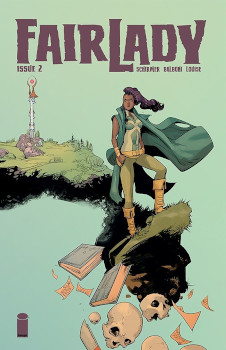 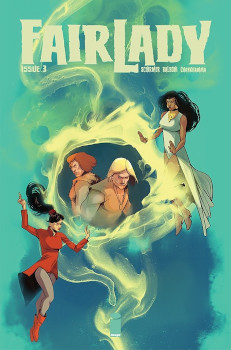 This story I both liked and I didn’t like. I’m not sure how much Jenner just fits into the “strong woman” character blanket, and I’m hoping we’ll get to know more specifics about her in these coming issues. But I do love detective books, and it helps that her partner is a large cat-shaped man named Oanu. Plus, those creatures they ride were pretty cute.

There’s elements of this world that haven’t arrived yet: a little Tolkien, but also a little Oz. It’s centered as a post-war book.

Not sure how I feel about Jenner’s interactions with other women. She’s mean to Nejla and slaps Samanda. But I guess she also punches the guys, or worse.

I’m not sure I understand what happened with Samanda, beyond being in a warzone changed her so much that she lost herself and found herself someone else. The tattoos and other spells didn’t keep Jenner from finding her, but also Jenner didn’t bring her back to the employer she stole from, so maybe they did work.

We’ll see how this continues.

Like the first issue, I felt that I was missing something here. I did not get the part of the mystery where Imelia and her husband Galin were weapons dealers until it was stated. I figured that Galin faked his death, but I still thought it was to get away from his creditors or the people he sold said weapons to, not to get away from his coconspirator, his wife.

I did really like the art in the scene between Imelia and Jenner. Both women felt distinct, and they had their presence. Imelia’s character seemed to peg her as innocent, and she certainly played it that way to Jenner. Unfortunately for her, going to the fairlady didn’t guarantee she’d get away with lying.

I’m sure we’ll meet the fairmen that Jenner questions again. However, there were just too many to try to remember them in any way.

The view of the wizard’s tower was lovely, and so was the art in the scene between Jenner and Nejla. Their movements, how they carry themselves, and how they interact with the objects around them speak to their different personalities. I continue to really like Nejla, and I hope we get more time with her in future issues.

I have mixed feelings about Dram, the barkeeper. On the one hand, a story likes this basically requires an innkeeper, but on the other, I was hoping for none of the main characters to be white men.

There wasn’t as much Oanu in this issue. However, the entire backmatter prose mystery was with him, and it set up a lot about his character and the world they inhabit. Also, it made the prose part far more interesting and relevant than the last issue’s ending short story.

This issue was probably my least favorite story of the three so far. Again, Schirmer skips out on giving the reader clues around the mystery, and then acts like Jenner easily solves it. He’s also been relying deeply on unreliable characters, and while that works to some extent, I did not believe the first body they found was Dunkarr.

Tantanah was too much. I get barbarian tropes, but I was hoping for something else. This book does such a great job with characters like Jenner and Nejla that I wanted more. The worst part was Balboni’s decision to give Tantanah heels. Seriously, she’s a fighter for a living; she’s not wearing heels!

I also continue to want more of Oanu. I hope he plays a pivotal role in saving Jenner in the next issue. Maybe he and Nejla can have a cute team-up.

I did not know what to make of Ari and Oosk, especially since they are friends with Nejla. Of course, given how this book goes, I’m also suspicious of them, and whoever chased off Dunkarr and his giant chicken at the end.

While I appreciate the question of what happens when Dunkarr wants to retire, I don’t know how effective his situation was. Except that I did like the giant chicken and how he immediately knew Jenner was not an assassin.

The backmatter story was okay, but it followed a similar path to the main story in issue #2.