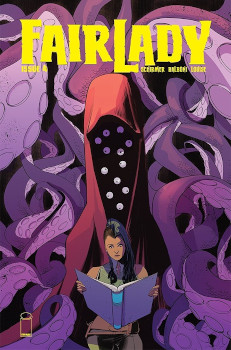 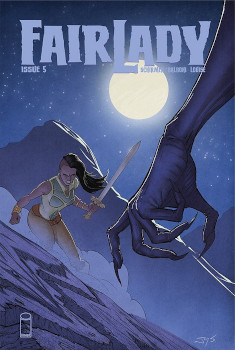 Jenner was actually kidnapped by a client who wanted to remain anonymous, not someone out to kill her. This is a better situation, but I’m not sure that erases someone wanting to off her. The cat head was utterly ridiculous.

I’m rather sad there was yet again no Oanu in this issue. They’re supposed to be best friends and sometimes work together, but where was he!

This book’s mystery was probably my favorite. Sometimes, you need ridiculous missions to mix things up. I loved that the Simulacra was so offended by the book’s ending that he went around ripping the last page from all the existing copies. It’s like how I sometimes wish I could erase the end of the Battlestar Galactica reboot from my brain.

As much as Nejla pretends not to like Jenner, she does like her a lot. It was amusing that in the end, they conjured up the dead author to figure out who done it.

The book quest gave us more insights about Fairlady‘s culture and world. The Library bits were hilarious, and I’m sure based on how libraries once operated. Of course, you had to be wealthy even to learn to read, and this wasn’t that long ago. (My great-grandfather was illiterate.)

I’d forgotten about Cam as a character, but he was a good foil in this issue. I also really liked Husker.

I liked the back story and the acknowledging of queer ladies. Yay for representation.

This is what happens when you don’t take Oanu on a mission as your backup. I’m still not sure why Jenner left him behind, except if she already figured out Romar Darry was no good.

Schirmer does need to figure out what he’s doing with Cam. Cam can either be a lawman who gets annoyed by Jenner but has some respect for her. Or he can be a jerk cop, who uses fairladies when it’s convenient for him but is snobby about his higher position of official authority.

The pacing was undoubtedly slower than previous issues. However, it did not throw me out of the issue itself. But this one creates a cliffhanger to issue #6, which the creative team has announced, but as of early January 2020, Image has not released a publication date.

I’m going to be incredibly unhappy if we do not get #6. Jenner is left bleeding on the side of a cliff. She and we hope Oanu rescues her.

The “who done it” part of the mystery lines up to Romar, even if there’s something bigger going on. He’s too into it every time they’re discussing Samanda or near to her. (I’m glad Jenner pointed out, as I did, that if she could find Samanda, then anyone could.) If Romar claims to hate Jenner, he definitely wouldn’t want to go on a road trip with her.

I’m not surprised there’s a monster here. The village tour guide was creepy enough and same with Samanda, the last time we saw her. I do wonder both Romar and Samanda will survive their tumble off the cliffside.